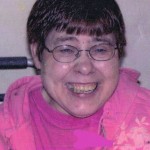 Rhoda K. Peterson, 66, of Sioux Falls, passed away on Friday, June 22, 2012 at her residence. Her funeral service will begin at 2:00 p.m. at the Trent Baptist Church in Trent, SD. Visitation will be held two hours prior to the start of the funeral service in the church. Interment will be in the Dell Rapids Cemetery.

Rhoda Kay Peterson was born on November 25, 1945, the daughter of Lloyd and Virginia Peterson at the Chester Clinic, Chester, SD. She grew up and lived with her family in the Trent area until she was 17. She moved to Redfield, SD and enrolled in the Development Center. In September of 1982 Rhoda moved to Sioux Falls, SD and became a resident of Sioux Vocational (Achieve). She was a resident at Churchill for the past 18 years. She enjoyed her many friends both resident and staff while she lived there.

She will be remembered for her good sense of humor and quick wit. She was a member of Trent Baptist Church. Rhoda enjoyed embroidering, baton twirling and music. She was preceded in death by her parents and her sister, Andrea Cressman.

She is survived by her sisters, Ramona (Jim) Huppert of Amery, WI, Gwen Amen of Sioux Falls and Virginia “Ginger” Hill of Baltic; her many nieces and nephews and friends at Achieve.