Davis spent the majority of the day signing autographs, taking picture and socializing with NutraClick employees and family members.

At the end of the day, Davis had about an hour and half before catching his flight back to San Francisco.   Davis asked the General Manager of NutraClick, Robin Wiebenga,  if it would be possible for him to visit a farm during his free time.   Wiebenga arranged a visit to the Mike and Becky Randall Farm, which her son, Andrew Wiebenga works.  “I told Davis that the farm would smell like cows.  I also offer to take him to The Falls or The Sculpture 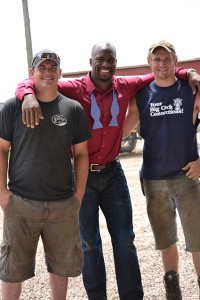 Walk in down town Sioux Falls.   Davis told me he really wanted to visit a ‘real farm'”, said R. Wiebenga.

A. Wiebenga (Dell Rapids High School student) and Seth Dybedahl (Dell Rapids High School graduate), Randall Farm employees, never expected that one of the top NFL players would visit them at work on the farm.  Davis expressed that he had never been on a farm.  During the visit Davis was very interested in the cattle, corn and the process for feeding the cattle.  A. Wiebenga said, “Vernon was interested in the farm life and he asked a lot of questions.”

When Davis was asked what advice he had for A. Wiebenga as a young football player, Davis stated, “Focus on your education and hit the weight room hard.”   Dybedahl said, “It is not everyday someone like Vernon Davis shows up on the farm, but we’re glad he enjoyed it.  We hope he learned something new.”

Davis was so happy with the trip to the farm he posted  pictures on Instagram of his South Dakota farm experience. 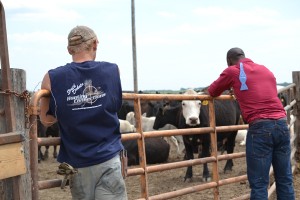