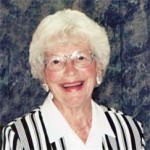 Margaret Emma Bisson was born on August 6, 1917 to Peter and Elizabeth (Carton) DeSplinter in Jasper, MN. She attended country school in District 36, Rosedell Township, Rock County, Minnesota through the eighth grade and then high school in Jasper. She grew up on the farm with one brother and two sisters. She also attended Schyler Beauty School in Sioux Falls, SD, to be a beautician. She was united in marriage on November 23, 1939, to Arthur J. Bisson at St. Joseph Catholic Church in Jasper. They farmed northwest of Jasper for 45 years and after their retirement they built a home in Jasper. Margaret devoted so much time throughout her life to being a caring wife, mother, grandmother, and great-grandmother. Following Arthur’s death in 2001, Margaret continued to live and thrive at her home in Jasper.

Margaret was preceded in death by her husband of 61 years, Arthur; her parents; one brother and sister-in-law LeRoy and Adeline DeSplinter; a sister, Sister Petrine DeSplinter; and one daughter-in-law, Anne Hunter Bisson.