HARWOOD, N.D., Nov. 3, 2015 Peterson Farms Seed is pleased to announce that John Geraets of Dell Rapids, SD, is the winner of its DJI Phantom 3 Advanced Drone giveaway.  Geraets farms with his family in the Dell Rapids area. 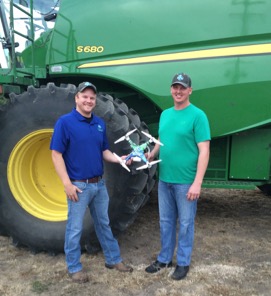 Rob Thuringer, Peterson Farms Seed representative for eastern South Dakota, says, “It was great to award the drone to John. He’s excited about this technology and already has ideas for putting it to good use to improve his family’s row crop operation.”

Peterson Farms Seed expanded into eastern South Dakota for the 2015 growing season to meet farmer demand.  As the largest independent seed company in the upper Midwest, the company offers its products to farmers through a network of seed dealers.  Peterson Farms Seed is heavily involved in new technologies, including UAVs, in an effort to help farmers get the most potential from every seed they plant.

Peterson Farms Seed remains an independent, family-owned company which has grown to be the largest, independent corn and soybean seed company in the upper Midwest. As an independent, the company has the freedom to select genetics and traits that best fit the needs of regional farmers rather than being tied to one breeding program and trait platform. The company’s extensive replicated testing program is well-known throughout the region. For more information, see their website at www.PetersonFarmsSeed.com.