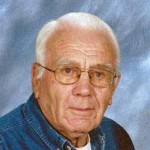 Milton “Tug” William Fritz was born on Sept. 10, 1934 to Raphael and Dorothy “Ann” (Honnermann) Fritz in Adrian. He was raised on a farm north of Adrian and attended country school for two years and then St. Adrian Grade School and High School. After his graduation from high school in 1952, he began working at the Adrian Coop Elevator until 1956 when Uncle Sam came calling and he left for the United States Air Force. During basic training in San Antonio, Texas and Columbus, Ohio, he worked on a KC-97 then the KC-135 Jet Tanker used for Mid Air Refueling. Later he worked on the B-47, the B-52, and several jet fighters. While on active duty, he traveled to Puerto Rico, Africa, Spain, Canada, England and South Africa. Milton was honorably discharged in 1960 and got home in time for Christmas.

On April 27, 1963, he married Patricia DeSchepper at St. Joseph Catholic Church in Jasper. Following their marriage, they lived in Jasper where he was employed at the Farmers Elevator. In 1976, he was promoted to manager at the elevator. After his retirement in 1993, he worked at the creameries in Edgerton and Woodstock part-time for a couple years.

In 2013 he became a resident at the Minnesota Veteran’s Home in Luverne.

He was a member of St. Joseph Catholic Church where he served on the cemetery board for many years. He was a volunteer firefighter for over 25 years with the Jasper Fire Department.

He was preceded in death by his parents and two brothers, James and John.