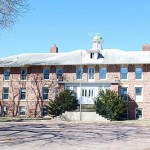 The South Dakota State Historical Society recently awarded nearly $63,000 in grants for five historic preservation projects including the Odd Fellows Home in Dell Rapids.  This is the 17th year for the grants, which come from Deadwood gambling revenue set aside for historic preservation in the state.  The grants are awarded twice a year.  The next deadline is October 1.

According to Wikipedia, the Independent Order of Odd Fellows (IOOF) was founded on the North American Continent in Baltimore, Maryland, on April 26, 1819, aiming to provide a framework that promoted personal and social development.  Around the world, the IOOF undertook various community and charitable projects including one in Dell Rapids in 1910 – to build a home for young children, widows and the elderly.  On May 17, 1911, Dell Rapids dedicated South Dakota’s only Odd Fellows Home on 10th Street.  The Home’s main three-story building, its 1923 power plant, and 1923 front gate were each designed by prominent regional architect Joseph Schwarz and were each made of locally-quarried Sioux quartzite with limestone accents, in a simplified Italian Renaissance architectural style.

By 1912, twenty-four residents, including 19 orphaned children and five retired persons, were living in the facility.  With IOOF members helping with schooling of the orphan residents, the young girls would take care of the halls and the cooking, while the young boys would be in charge of farming the 100 acres on the site.  The Odd Fellows Home ceased to be an orphanage after 1947 with the facility housing only retired elderly.  Then in the 1960s the Home changed from a retirement facility to a nursing home.  In 2003 the Odd Fellows Nursing Home closed its doors and remained empty until Joan Rasmussen (daughter-in-law of Dells residents John & Joan Rasmussen) purchased the facility and the three acres surrounding it in 2006.  Joan is currently having the buildings renovated into residential apartments.

Recently Mrs. Rasmussen applied to have the Home on the National Register of Historic Places, and it was found that Jay D. Vogt, director of the State Historical Society, recommended the Odd Fellows Home be registered (http://www.cr.nps.gov/nr/feature/weekly_features/2012/oddfellowshome-dellrapids.pdf) by his signature dated 12/29/11 and entered in the National Register dated February 21, 2012.  By going to the above link you can read the entire application which includes description and additional pictures of the historic buildings.