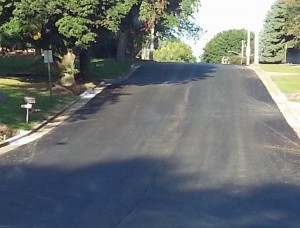 The Northview Dr/11th St/1oth St project to replace the water line and sewer line is nearing completion.  That report came from City Administrator Justin Weiland during the city council’s regular meeting on Tuesday, September 8th.  Weiland reported that at the time of the meeting all the asphalt had been completed and curb and gutter was installed the prior week.

Weiland mentioned that walk-thru inspections were going to be taking place during the next week to put together a final list of items that needed to be done prior to the final sign off of the project.  Some of those items might include back-filling and re-seeding boulevards that may have been dug up during the course of the project.

Weiland also said, “We’ve had several compliments of clearness of water up and down the project.”

Trent Bruce of DGR told the council, “We anticipate the project cost is going to come in real close to the budget.”