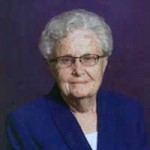 Beginning life a shy farm girl, she met her life’s challenges with courage and tenacity and hard work. Her marriage was a love match that ended too soon with the death of her husband Charles after only 38 years.

Driven by faith and compassion, she dedicated herself to good works of all kinds. First out of necessity and then out of a need to create and to give, Myrtle made sweaters with complex designs, sewed garments of all kinds (including wedding dresses and tailored jackets), prepared entire banquets, baked dozens and dozens of Christmas cookies, pies and rolls, and of course, constructed the quilts. Her enthusiasm overtook her shyness as she led friends in traveling expeditions and organized the St. John’s quilting group. She took pride in being Irish, and derived great joy from holding babies and picking berries. Myrtle was fierce in the face of injustice and unbowed by adversity.

On-line condolences may be left at Holcomb-Henry-Boom-Purcell Funeral Home.