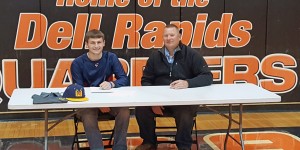 Roemen was selected to the 2016 Class B All-State Team for Dell Rapids High School baseball last season.  He was also named to the All-Region team as he helped lead the team to the four-team state tournament.

Dell Rapids High School head coach Nate Alfson said,  “Josh has been the type of athlete that most coaches hope to have.  Qualities like work ethic, ability and willingness to grow and improve his game, and an overall confidence that can be contagious to his teammates.  Since Josh first began playing for my program, I would notice how intense he was as a player, and when I would challenge the guys with a situational question, Josh would most likely be the first to answer.  He is very knowledgeable and has tons of experience as a player.  I have seen Josh at his worse, and I’ve seen Josh at his best, but my favorite part about Josh is that when he has an off day, he finds ways to bounce back and make the next day a better one.  Whether that be practice or a game, Josh is always looking to perfect his game.  I’m incredibly proud of Josh on his accomplishments and his signing to Mount Marty.  He is going to be very successful there! I am very proud of all the Dell Rapids student athletes.  They are full of talent and all have bright futures if they continue to work at it!” 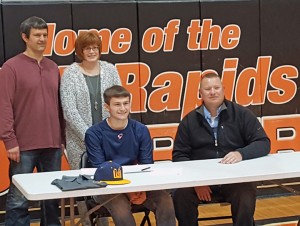 Dell Rapids Legion coach Bruce Mogan said, “Josh has worked very hard to turn himself into one of the best players in the state.  He has always been a skilled hitter and is at his best against the top pitchers.  The last two seasons Josh has been solid at shortstop for the high school and Legion teams.  He puts in a lot of hours taking ground balls and it has really paid off.  Josh also is a skilled pitcher.  He doesn’t get a lot of innings because he is so valuable at shortstop.  I have really enjoyed watching Josh grow as a player and teammate.  He is a great representative for Dell Rapids baseball.  I expect him to have a great deal of success his senior season in high school baseball and carry that success into the summer and college at Mount Marty.”