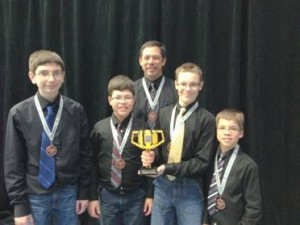 Four boys from Baltic and Dell Rapids competed in the South Dakota State First Lego League Competition on February 9th at Augustana College. After qualifying for the state competition in December, and going head-to-head with nearly 40 other teams at the state level, they won an award for the “Most Innovative Solution.”

First Lego League is a national competition structure where middle school students (ages 9-14) design, build, and program an autonomous robot to earn points for accomplishing prescribed missions on a 4×8 playing field. They also give presentations on research projects where they have tackled a problem and propose a novel solution.

Participants must work as a team and be able to articulate what they did and how they accomplished it. The national organization calls it “Sport for the mind.”