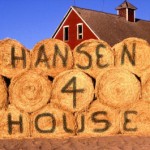 Hansen lives in Dell Rapids with his wife Sheila and their three children.  “We’re so blessed to call this community our home, and if elected, I look forward to once again standing up for the people of our district so they know that someone out in Pierre has their back,” Hansen said.

Hansen previously served in the State House from 2010 to 2013.  During that time Hansen served in leadership as a majority whip and as vice chairman of the House Judiciary Committee.  Hansen holds a law degree from USD.

While in Pierre Hansen, a fiscal conservative, advocated for low taxes and fees, open and efficient government, protection of life, preservation of family farms, and quality education for South Dakota children.

Hansen will face a primary election on June 5th, 2018.