The construction on the Highway 115 Project has continued slowly throughout the months of 2018, but Dell Rapids City Administration still believes that the majority of the concrete work will be completed before the end of the year.

City Administrator Justin Weiland gave a report to the Dell Rapids City Council during their regular meeting on Monday, November 5th.  Weiland mentioned that he thinks T&R Contracting will get the main paving done yet this year, and that is what the contract states.  The contract does also roll into June of 2019 for finish work.  Weiland mentioned that the city probably won’t see the trails poured or the seeding done this year.

“They’re going to have to come in and play cleanup in the spring,” Weiland said.

Weiland also mentioned an issue was recently discovered with the project.  The bridge elevation just west of the four-way stop was designed at a lower elevation than the design for the road elevation.  The issue was not caught before construction, but plans are for that issue to be fixed.  Weiland mentioned that the road diversion has not been removed yet, and he thinks once the rest of the concrete is complete west of the bridge, traffic will be routed back to the diversion to fix the elevation issue.  Weiland also said that he wasn’t sure exactly how T&R Contracting plans to fix the issue, but it will be fixed.  A temporary blacktop patch has been put in place to allow traffic through while concrete work continues.

Not only has the project been delayed, and now has an issue with the bridge elevation, the city of Dell Rapids has also seen a decline in sales tax revenues.  The council was presented with numbers for September, and once again the sales tax revenues were down compared to 2017.  July was down 11.68%, August was down 23.24%, and September was down 6.7%.

“This highway project, in my opinion, has affected sales tax within the community.  The biggest thing that we want to make sure is that people’s trends haven’t changed, or they haven’t altered their habits,” Weiland said.

He also mentioned that once the majority of the project has been completed, they city plans to work with the Dell Rapids Chamber of Commerce and media outlets to get the word out to people that the city is “back open for business”.

The South Dakota Department of Transportation’s Highway 115 project continues to make good progress.  That was the report given to the Dell Rapids City Council during their regular meeting on Monday, September 18th.  The DOT told city officials that the interstate interchange is on schedule.

Steel for the interchange is scheduled to be delivered to the site around September 30th.  Once the steel is delivered, the plan is for the girders to being to be installed.  The DOT said that contractors plan to work diligently to complete and open the bridge by the estimated completion date of the end of October.

In the meantime, shoulder grading for the Highway 115 project has begun in city limits.  That work began this past week.  The shoulder work is currently being done on the north side of the highway from around the 4-way stop out to the interstate interchange.  This work is actually outside of the scope of the initial project plan for this time of year, but the DOT is working to get a head of schedule for when work resumes next spring.

The final piece of the report shared is the DOT currently has plans for the contractor to possibly take down the north bridge on Highway 115 leading south of town.  The bridge could potentially be removed before Christmas this year.  This again is to get ahead of plans for next spring. 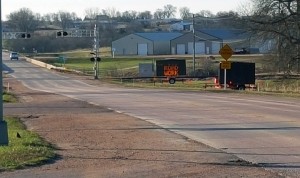 The South Dakota Department of Transportation began work on a reconstruction project for Highway 115 and to replace a bridge over the Big Sioux River just south of Dell Rapids on Monday, April 4th.  Once the bridge is removed during the project, traffic on Highway 115 from Centennial Place to Quarry Road will be detoured to 3rd Street to Garfield Avenue to Centennial Place.  Signs will be in place to direct the traffic.

The entire reconstruction part of the project on Highway 115 also includes grading, storm sewer, structure work, and concrete pavement surfacing from Quarry Road to 248th Street.  Traffic will be maintained through this portion of the project, however, motorists are encouraged to use the suggested detour of Minnehaha County Highway 114 (250th Street) to Interstate 29 (Baltic Exit 94) to Highway 115 (Dell Rapids Exit 98).

The anticipated completion of the $8.3 million project is early November.  The prime contractor for the project is Reede Construction, Inc. of Aberdeen, SD.

More information can be found by visiting www.safetravelusa.com/sd or by dialing 511.