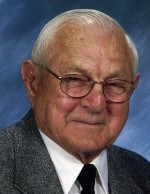 Harvey L Pederson, 91, of Dell Rapids passed away peacefully on Saturday, February 2, 2013 at the Dells Area Health Center. His funeral service will be held on Wednesday, February 6, 2013 at 11:00 a.m. in the United Methodist Church, Dell Rapids with Rev. Gwen Mader. Interment will be in the Dell Rapids Cemetery. The Dell Rapids American Legion Post will provide Military Rites. Visitation will begin at noon on Tuesday and the family will be present to greet friends from 6:00 to 8:00 p.m. To leave condolences please visit www.kahlerfh.com.

Harvey Pederson was born on October 29, 1921 in Clark, SD, the son of Carl and Minnie (Thies) Pederson. He moved to Dell Rapids in 1929 with his family and graduated from Dell Rapids High School in 1941. After graduation, he worked at his parents Pump and Windmill repair business until 1942. Harvey moved to Sioux Falls with his mother and worked at the Civil Service on the Army Base. He entered the Navy in 1943 during WW II and was discharged honorably in 1946. He was united in marriage on August 25, 1946 with Evelyn C. Olson in Dell Rapids. Harvey was self employed at his Pump and Windmill Repair business until 1960 when natural gas came to Dell Rapids and he was offered the service representative job. He retired from MinnegasCo in 1982. He was the handyman and parts runner at Dearduff Chevrolet for many years.

He is preceded in death by his parents, and one brother.