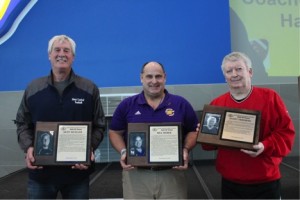 Dell Rapids resident Scott Freeman was inducted into the South Dakota Football Coaches Association Hall of Fame on March 24, 2018. He enjoyed a very successful coaching career in South Dakota nine-man football that included stops at Hurley, Montrose and Colman in the 1970s and 1980s.

He coached from 1971 through 1987, compiling a 109-29 career record that including mythical state championships with Hurley in 1972 and Montrose in 1974 before South Dakota implemented the high school football playoffs.

Montrose enjoyed an undefeated season in 1974 that included a 30-22 comeback win over Freeman in a game that matched No. 1 rated Montrose and No. 2 rated Freeman.

He was named the Corn Belt Conference’s Coach of the Year in 1974.