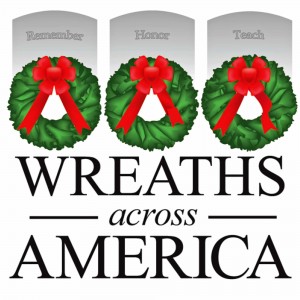 PIERRE, S.D. – The South Dakota Funeral Directors Association will again participate in Wreaths Across America, a national program which pays tribute to fallen veterans of all wars during the Christmas season. A formal wreath presentation will be held at the Flaming Fountain Veterans Memorial on Capitol Lake in Pierre at 11:00 AM on Monday, December 7, 2015.

In 2014, Wreaths Across America and our national network of volunteers laid over 700,000 memorial wreaths at 1,000 locations in the United States and beyond. They were able to include ceremonies at the Pearl Harbor Memorial, as well as Bunker Hill, Valley Forge and the sites if the September 11 tragedies. Wreaths Across America accomplished this with help from 2,047 fundraising groups, corporate contributions, and donations of trucking, shipping, and thousands of helping hands.  Our goal of covering Arlington National Cemetery was accomplished in 2014 with the placement of 226,525 wreaths.

The Wreaths Across America’s mission is to Remember, Honor, and Teach. Remember the fallen, Honor those who serve including their families who sacrifice, and Teach our children the cost of the freedoms we enjoy each day. It is our shared belief that…

‘The nation which forgets its defenders will soon be forgotten.’ – Calvin Coolidge