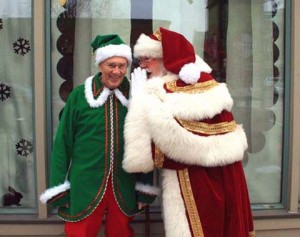 Downtown Sioux Falls, Inc. (DTSF) is proud to announce that Frank Boerema (former Dell Rapids resident/Pastor) has been selected as Grand Marshal to lead the 2014 Parade of Lights.

Boerema is a very active volunteer both at several downtown non-profits and throughout all of Sioux Falls. He donates his time to DTSF, Lutheran Social Services – Center for New Americans, Creative Spirits, The Community Outreach, Morning Optimists, Center of Hope Bike Ministry, The Banquet, Phillip’s Home, Snow Fox, Cub Scouts, Symphony Choir, Church Choir and Men’s Chorus. He also supports individuals in the community through personal coaching and helps out at a variety of charity events and several churches.

Maureen Ohm, Event Director for DTSF said, “Frank volunteers at nearly every DTSF event, and not only does he do so with a smile on his face, he even thanks me for the opportunity. Frank shows up early for volunteer shifts and never leaves until the whole event is dismantled. His positive attitude radiates and brightens the day of anyone nearby.”

A constant advocate for downtown, Boerema also lives downtown and is an active member of the DTSF resident committee. He is a shining representative of downtown Sioux Falls. Boerema says, “I love living downtown, and I proudly think about the people and businesses as my neighbors. I try to do everything I can to support and encourage them. What a better way to do that than with the Parade of Lights – starting a season that says, ‘it is better to give than to receive.’ ”

Boerema will not only appear as Grand Marshal in the Parade of Lights – he is also one of Santa’s elves! Boerema has known the self-proclaimed “Sioux Falls Santa,” Lyle Kroon, for over 40 years.

Santa says, “From the time that Buddy the Elf or Frank and I were in college together, our paths have been diversified. Looking back, we see how they have intersected numerous times through the years with similar life experiences. Frank is truly a fine person, and you will find his name at the top of the nicest of nice lists that Santa puts together each Christmas. He is a joy and inspiration to know and call a friend.”

This year’s Parade of Lights presented by CenturyLink will take place on Friday, November 28, 2014 at 7:30 pm along Phillips Avenue from 14th to 5th Street in historic downtown Sioux Falls.

Immediately following the parade, an awards party will be held at the Holiday Inn City Centre where five awards will be given to the entries that dazzled the judges. The public is invited to attend. Santa and Boerema the Elf will both be in attendance.