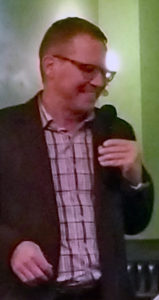 The Dell Rapids Chamber of Commerce was able to hold their annual banquet before gatherings came to a halt.  The banquet was held at Papa’s Pub on Sunday, March 15th.

Those who attended the event had a meal prepared by Papa’s Pub and heard this year’s guest speaker Jason Freeman.

Prior to Freeman speaking, the Chamber handed out annual awards. 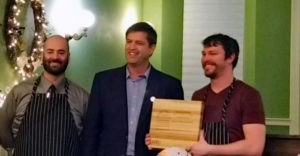 The first award that was given by the Chamber was the winner of the month-long “Battle of the Buns” burger competition between Papa’s Pub, Pinz, Norby’s, and County Fair.  A total of 692 votes were cast during the month of February, and the votes gave the award to Papa’s Pub.

The Chamber also gave away their three annual awards.  The Community Spirit Award was given to Fabulous Moments.  The Business of the Year was awarded to Corduroy and Pixie Dust.  The final recognition were the Volunteers of the Year, Stacy Franka and Tami Drew.

For years, the Meat Raffle put on by Norby’s Bar and Grill has been a standout event. On Friday, January 25th at 6pm Fabulous Moments will host a meat raffle. Providing both a charitable donation towards a specified cause and also an opportunity to literally bring home the bacon, it brings about the best of two worlds.

Fabulous Moments, one of South Dakota’s newest nonprofits, will be the beneficiary of the generous donations made in the upcoming raffle. Striving to “make memories one fabulous moment at a time,” the group creates travel opportunities for those who are facing life threatening illnesses along with their families. Fabulous Moments was launched with the intention of assisting families with a wide-variety of health ailments, the organization’s impact is only as pertinent as the funds being raised by volunteers and donors alike.

Founded by Robin Wiebenga of Dell Rapids, Fabulous Moments has coordinated the trips of two separate families dealing with life-threatening illnesses since its conception in 2017. The 501(c)3 makes the aspiration of one final memory truly a reality. To make a donation, submit an application, or learn more about the mission of Fabulous Moments, please visit their website at FabulousMoments.org.