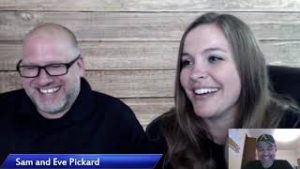 “They kept on asking me do you have any shortness of breath, is it hard for you to breathe, are you coughing?  The only really time that I had any time of shortness of breath or coughing spell was when I found that they cancelled graduation.  And that was only because I was really upset, and I was crying.  I just felt bad that all the students, all the seniors, this just wasn’t a year that they had planned.  They had so many things taken away from them from prom, to last day of school, and now graduation,” explained Eve Pickard, along with her husband Sam, in an interview with Big Sioux Media.  “I felt responsible, and I felt horrible.”

Eve was officially diagnosed as positive for Covid-19 on Friday, May 15th, just one day before Dell Rapids High School was set to hold a smaller, individual, virtual-type graduation.  Hours later messages were sent from the school saying a staff member had tested positive and graduation would be cancelled.  The Pickards made the decision to go public.

“As the word was coming out, and the school was truly respecting Eve’s privacy in it.  People were asking questions like ‘Who is it?’ and ‘What do you know?’, just that stuff that kind of goes below the surface.  Eve made the comment to me, ‘I wanna say that it’s me because I don’t want people spreading rumors trying to figure out who it is.  It would just be easier if we came out and said hey it’s us.  I’m sorry.  I really love these kids.  I feel bad,'” said Sam.  “We just decided to be out there and let everybody know what was going on.”

From that point Eve took to isolation for the next week or so to fight the virus, while the rest of the family was put in quarantine in the house.  The Pickards also made the decision to journal the experience on Sam’s Facebook page daily to keep people updated on how Eve and the family was doing.  Eve mentioned that through her fight with the virus, she never had the serious symptoms that is typically reported in the media.  Eve said that some of the symptoms she fought were a fever, headache that felt similar to migraine, eye pain, some short-lived aches and pains in joints, and a loss of smell and taste throughout the life of the virus.

“Eve has commented that for her it was probably maybe the hardest part, worse than the headache, worse than anything is not being able to be around anybody is almost the worst part.  But for the rest of us, you don’t realize how the little things like I can run to the gas station, or I can order a pizza at Pizza Ranch, or I can pick up something at Papa’s, or I can do drive-thru at Dairy Queen, you just don’t realize how much just that break out of the house is appreciated.  The hard part was truly not leaving the house,” Sam said.  The Pickards spent the time doing games, puzzles, continued to work, and also did some work at the house.

“People were truly great.  People were dropping of care packages.  We had some friends drop off some Nerf guns.  There’s a certain Nerf bullet that hits harder than the others ones, so that got used the most.  We would ambush each other,” commented Sam.  “We still went on with our normal activities with the exception of actually seeing people.”  Sam also mentioned that they continued to monitor temperature and look for symptoms for everyone else in the family during the quarantine.

Faith and family are very important to the Pickards, and that part of their lives didn’t change.

“We were intentional about trying to find activities during the day,” Sam said. “We do a lot of stuff together as a family anyway.  Family is very important to us.  This just gave us another opportunity instead of complaining about ‘This is awful, why do we have to be here?’ to looking for ways to have fun as a family and try to pass the time.”

“There was confidence that we would get through it, not knowing what it might look like, but the belief that God is still in control and He is still over all of it, so we will get through it.  That was part of it.  Maybe, though as big or bigger, as Eve and I have talked, she made the comment numerous times, ‘if the worse thing that could happen is I die, I know where I’m going.  I’m not afraid of that.’  I think that there was not really a fear in it,” explained Sam.

The Pickards also mentioned that they were blessed with their church family and friends constantly checking on them and asking if there was anything they could do for the family.

Eve has made a full recovery from the virus since the positive test.  Both Sam and Eve said people should take care of themselves, don’t judge other people on how they approach the virus, try not to live in fear, calm down and try to look at things from a different perspective, but yet still take the virus seriously because even though some may not get serious symptoms, others do.  They also mentioned that going through and working with their family doctor played a big role in helping stop the spread because the family doctor has more of that personal relationship and history to help decide if a test is needed or not.