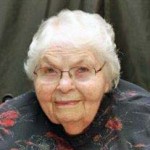 Dorothy Ruth Eleanor Weets was born on June 26, 1922 to August and Hortense (Conrad) Peterson in Pipestone and was raised near Jasper. She was baptized and confirmed at Trinity Lutheran Church in Jasper. She attended elementary school in a country school near Jasper and graduated from Pipestone High School.

On Feb. 21, 1941 she married Rhinehart Weets at her parents’ home. Following their marriage they lived on a farm near Flandreau, S.D. Later they moved to Jasper where she lived for 59 years. In 2004 she moved to Pipestone. In January 2014 she entered the Good Samaritan Communities of Pipestone.

Dorothy was a lifelong member of Trinity Lutheran Church in Jasper where she served on the Ladies Aid. She was also a member of Eden Extension Club.