Dell Rapids Superintendent Dr. Summer Schultz said, “Although student contact time is always a priority, this change provides staff and students an additional four days out of school to isolate or self-monitor symptoms before the Christmas holiday.   The additional time will also help our custodial crew as they continue to work tirelessly to clean and disinfect the facilities.”

The original break was scheduled to start with a 1:00 p.m. early release on Tuesday, December 22nd and last until Monday, January 4th.

The Dell Rapids School Board approved the 2017-2018 school calendar during their last regular meeting on Monday, January 9th.

“This upcoming calendar would be the second year of doing the two spring breaks instead of a longer spring break, and I just thought we should wait that out and then make a decision that we’re going to do a multi year with a spring break or spring breaks, make sure that that’s what we like,” said Schultz.

Schultz also mentioned, “Other things that we’ve implemented seem to be working.  People seem to really like those four day breaks after conferences.  The day before Thanksgiving has been popular.”

School will begin on Thursday, August 24th, 2017.  The last day of school is scheduled for Wednesday, May 23rd, 2018.  Thanksgiving break will be November 22nd – 24th.  Christmas break will run from December 21st – January 2nd.  March will have breaks on March 9th and March 16th for spring break, and then March 30th for Good Friday.

“I did not put an early out in for staff development that month (March) just because I felt like the three Fridays chopped it up too much,” commented Schultz.

“I guess from my standpoint, the comments I’ve heard, the feedback, has been positive too,” said Dell Rapids School Board President Tom Morris.

The school board will still make decisions on make-up days for snow days in a meeting prior to the end of the school year. 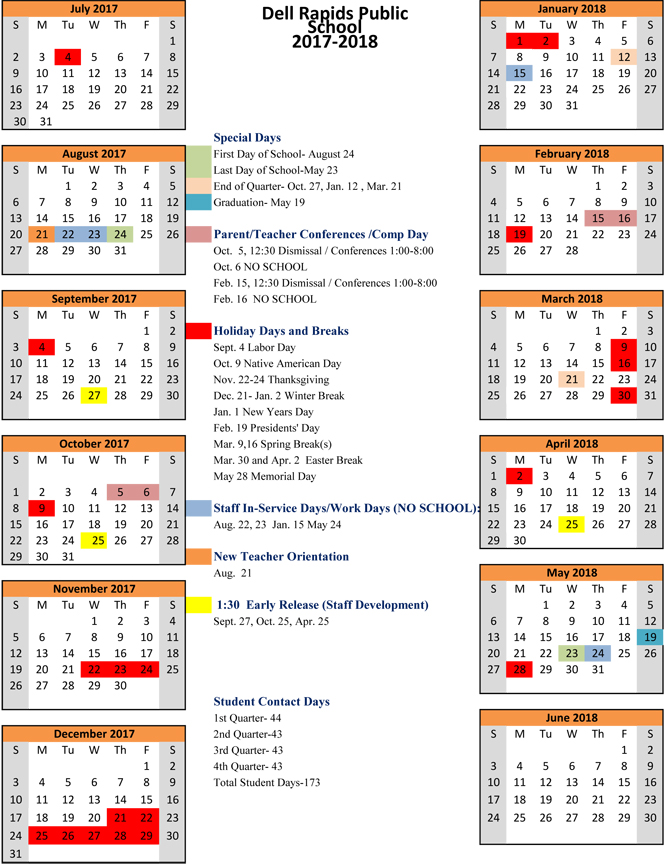 The Dell Rapids School Board added two more days to the current 2015-2016 school calendar as a make-up for missed days to this point in the year.  This decision came during the school board’s regular meeting on Monday, March 14th.  Currently Dell Rapids has had school cancelled because of three emergency weather-related days and two days of school closing for the girls state basketball tournament.

The school board has added days to the end of the calendar in the past according to Superintendent Dr. Summer Schultz and School Board President Tom Morris, but it was mentioned during the meeting that not all of the school days missed have been made up in years past.

“I think that’s because of the difference between an emergency day and a school closing.  Because some of those were in a different quarter, a different semester.  It’s unfortunate because they’re emergency days, and they don’t get that day of school.  But it’s not necessarily that you can make up that particular day and what needed to be done on that day later in May.  It can be a completely different class they’re in.  That’s the hard part making it apples to apples, ” said Dr. Schultz.

School board member Steve Stofferahn said, “If we missed a day in November, that’s the second quarter.  Those classes are all done and gone.  Making our fourth quarter longer is not doing anything extra for those kids.  We’re probably not going to miss any days in the fourth quarter for snow days.  We should have adjusted those quarters in what we should have done.”

Stofferahn also mentioned, “Going into next year’s calendar, we’ve already set the position that we’re not going to take days off for the basketball tournaments.  We have two days built in.  We won’t have those issues.  It will just be snow days.  I don’t think it will be quite as big of an adjustment in future years.”

After a bit more discussion, Stofferahn motioned to move the final day of school from Wednesday, May 25th to Friday, May 27th, and to adjust the third quarter end date to March 24th.  The motion was seconded by Schumaker, and the motion passed.

The Dell Rapids School Board approved the proposed calendar for the 2016-2017 school year during their regular meeting on Monday, February 8th, but made a couple of changes to the calendar that was proposed.

“It’s very similar to last year,” said Superintendent Dr. Summer Schultz.  “It’s gone through Superintendent’s cabinet.  There were just a couple of areas that I wanted to make sure I got input on, and I got it.  That was on the idea of spring break and the idea of in-service.  Spring break is a tough one because April 14th and 17th is Easter.  I asked a couple of choices.”

Dr. Schultz then presented the proposed calendar that had a start date of August 25th, Christmas break from December 22nd-January 4th, and a spring break March 23-24.

The board then had discussions regarding the scenario of a possible bad winter and having to continue school after Memorial Day to make up for snow days.

Another topic of conversation brought up around the calendar was taking days off for state tournaments.  “I feel, this is just my recommendation, that for all sports, if students want to go and parents want to excuse them, that is fine.  But it’s hard for me to justify, with a school of 1,000 kids almost, to shut down when any of our teams make it to the state tournament.  There’s such a big chunk of kid that are not going to those.  Staff that are not going.  I’m not saying that in a negative way.  It’s just that a majority of people don’t go.  I would recommend we try moving forward that we don’t just have a mass cancellation,” said Dr. Schultz.

After discussions about snow days and taking days off for state tournaments, the school board made slight changes to the proposed calendar.  They asked that the start of school be moved to August 24th, students come back from Christmas break on January 3rd, and instead of a four-day spring break in March, two back-to-back Fridays will be no-school days.  The final day of school will be Tuesday, May 23rd.  The day earlier start to school and the earlier day back from Christmas break allows for a couple of extra days for snow days without having to bring students back after Memorial Day.

The school board approved the calendar with their suggested changes along with not taking any additional days off for state tournaments starting with the 2016-2017 school year.  The vote passed 4-1 with Matthew Weiland voting nay. 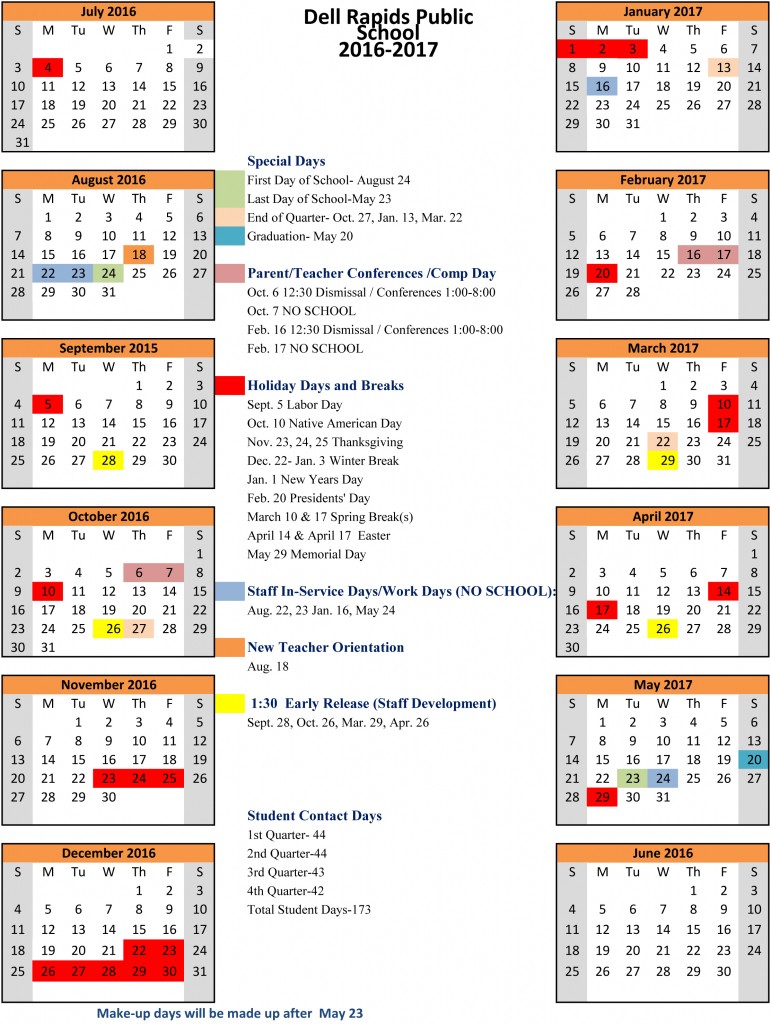 The Dell Rapids School Board approved the 2015-2016 school calendar during their regular meeting on Monday, February 9th.  Superintendent Dr. Summer Schultz presented the recommended calendar to the board for discussion.

She said, “As you know, I work with the Superintendent’s Cabinet.  We have mixture of high school, middle school, elementary…very aware that for high school folks there’s still some growing pains getting used to not having the semester end at Christmas break time.  However, the cabinet by the end of weighing the pros and cons of everything, this is the agreement that we came up with to recommend.”

Schultz and the cabinet held discussions with Mt. Marty to make sure the students enrolled in the online dual credit classes that are in collaboration with Mt. Marty would be able to still participate in the program with the school calendar ending the first semester on January 15th.

“We have been able to give the okay to extend our semester a little bit differently so that those students will still be able to participate.  Because that is one aspect that I don’t think if you don’t have a high school kid, you don’t understand that part of it.  That’s a big chunk of kids that we were worried about.  We’re able to be comfortable now knowing that they (Mt. Marty) will work with us even with having our semester end on the 15th,” Schultz mentioned.

Schultz also told the board that the high school finds it very important to have semester one and semester two even with each other.  However, with block scheduling, to have the first semester end by Christmas time, the school year would have had to start around August 20th, and then have no breaks.

“You’ll find some schools are starting a bit later this year, but they’re still getting out at Christmas time with semester one.  With a block schedule that doesn’t work if you say have kids competing for scholarships and things and you have five less days in semester one, which actually is 10 less days in a block schedule.  So that was kind of a non-negotiable our high school staff told me.  Therefore, in order to get semester one done by Christmas break, we needed to start by about the 20th, and then there were no breaks.  There was no Wednesday before Thanksgiving, there was a short Christmas break, there was no day after conference, which are things that the staff really did like, hence we decided on still not ending semester one at Christmas time,” Schultz explained.

The 2015-2016 school year will begin on Wednesday, August 26th, and will end on Wednesday, May 25th.  Graduation is scheduled for Saturday, May 21st.  The school calendar also features a spring break at the end of April.

Schultz said that there are 173 student-contact days and 178 staff days, and the semesters are as even as they possibly could be.  The board approved the new calendar unanimously. 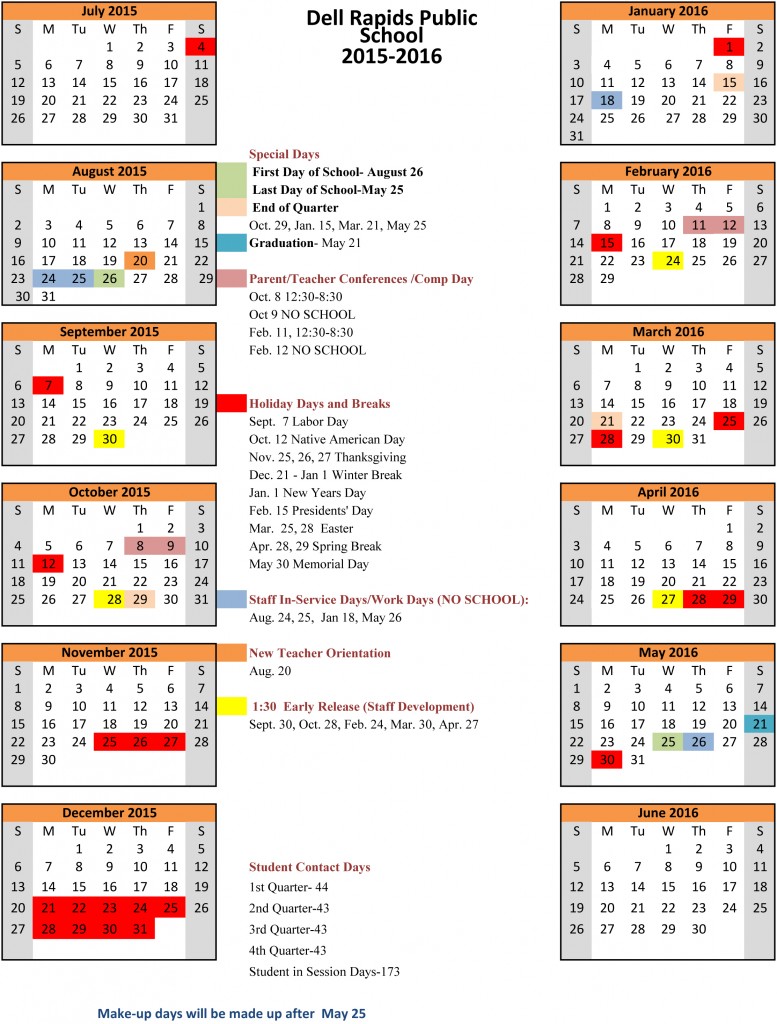