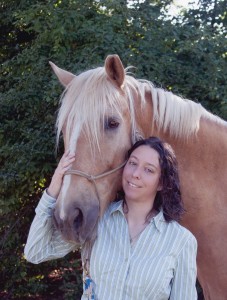 Meredith Cherry and her horse, Apollo, have set out on a journey to cover 10,000 miles on a four-year ride around the United States. The ride is to raise awareness about domestic violence. The “silent epidemic,” as it is known, is extremely prevalent in today’s society. Domestic violence is not often talked about, and it is estimated that one in three women will become victims of domestic violence at some point in their lives. The age range for domestic violence victims is usually anywhere from 19 to 34 years old. Cherry has named her journey “The Centauride”.

Cherry and Apollo will ride through the 48 states and visit places such as domestic violence centers, women’s shelters, schools and community centers to help bring awareness and the reality of the issue to attention. They also want to provide hope for the women that have dealt with and are still dealing with the effects of domestic violence.

Cherry started her journey back in January of 2017 and has a goal to ride into the last of the 48 states in 2020. “I wanted to travel, but couldn’t decide on a place. So I just decided to ride all 48 states,” said Cherry. She prepared for her journey for over two years. Some of those preparations have included training, fitness, mapping, and logistical planning. The horse lover has a degree in Equine Science from Colorado State University.  “I have a wide range of knowledge in horses even if I don’t have a lifetime of experience,” stated Cherry. “It’s what I love, and it sounded like a lot more of an enjoyable way to travel than riding my bike all over the states.”

Back in 2014 is when Apollo found his home with his owner. He was the first horse that Cherry had owned. Cherry has been riding horses for roughly 20 years now. She escaped her own domestic violence relationship a few years ago, but the one thing she missed the most during her marriage was riding horses and traveling. Cherry decided to bring Apollo home and have him be her partner for the long journey that was ahead of her. “He knows his job. I basically don’t have to steer until we get to a corner, or if there is a car coming he knows to move over, and I don’t have to tell him so much anymore. I still do just for safety, but he knows that he has to move over if there is a car coming,” said Cherry. “He knows his job real well and for the most part he likes it. He’s at this point where he’s desensitized to everything, basically.”

Come winter seasons Cherry and Apollo make their way back home and take a break from riding until the warmer months come around again. “During the winter when I was working on my plans for this year, I was not looking forward to riding through the Midwest. ‘Booooorrrrinng,’ I said.  I figured it would be one long flat trudge through cornfields. I am happy to admit that I was wrong.  The Midwest is a great place.  There are more nice people here, the scenery is not actually boring, and while yes there is a lot of corn, it’s very pretty corn.  And there is plenty more to see and experience than cornfields,” stated Cherry. “It’s really nice here.  We did mountains pretty much all of last year; one mountain range or another, so it’s really nice to see these nice rolling hills. It’s a lot better than mountains.”

When planning her trip she was “warned” that in the Midwest there were only houses every fifteen miles and there were no places in between. “I thought, well that is kind of frightening because I have to stop every fifteen miles, so I hope everyone is friendly. But it’s not like that at all,” said Cherry.

On Friday, August 17th, Cherry and Apollo made there way into the Dell Rapids community. South Dakota is the eighteenth state on their list of the 48 states. Their route for their journey has changed a few times over the course of the adventure, but has stayed pretty close to the original route planned. The most recent of routes can be found on her website, http://www.centauride.org, as she tries to keep updated on where they are headed next. Cherry has recently changed her route and is working on getting the updated map on her site. “It will still be the same at least for the Chicago area,” said Cherry. “Seeing America at 3 mph is wonderful, but the slow pace requires that I be very efficient and careful about selecting my route.” Cherry typically tries to go north in the summer months and more to the south in the winter months to be able to get as much riding in as possible over the course of the year. “I don’t have to think too hard about when to set my alarm, nor do I need to ponder what I’m going to do with the hours in my day, but the actual routine itself is not easy nor simple,” stated Cherry.

After riding through South Dakota, Cherry and Apollo plan to make their way into North Dakota and over to Minnesota. They will continue their journey with plans of crossing the finish line of state number 48 sometime during the year of 2020. Until then, they will continue to bond over their amazing adventure and continue to raise awareness of domestic violence here in the United States while enjoying the best views they possibly can.