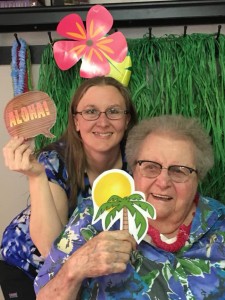 Dells Nursing and Rehab is busy crossing off things to do on their resident’s bucket lists.  “The bucket list idea actually came from our MDS Coordinator, Tracy Jensen, and Beth Koedam, Social Services,” Marissa Runge, Dell Nursing and Rehab’s Activities Director stated.  “She decided to start asking each new resident what is one item on their bucket list. Well this quickly soon grew to her asking on everyone’s quarterly assessment. Tracy is always looking for new and fun ideas to keep residents and family members involved.”

The first bucket list item completed was an emotional one.  Ruth, a resident at Dells Nursing and Rehab, wanted to visit with her brother just one more time.  Now this sounds like an easy fix, right?  Well, Ruth’s brother lives in a nursing home in Illinois.  “Ruth didn’t know the name of the nursing home, and this is when Tracy had to begin to think creatively,” Runge explained.  “After Tracy’s hard work, calling over 10 facilities trying to locate him, she got in contact with two special staff who were willing to help us reconnect them.”  A date and time was set to use a computer at the Dell Rapids facility and a cell phone at the Illinois facility to have the siblings be able to video chat over the screens.  “Now was the best part…telling Ruth Tracy’s complete plan,” Runge said.  “Moments like this are hard to describe, but they are ones you’ll never forget. Ruth was in a meeting with several managers and her daughter-in-law. Tracy broke the news to Ruth that she was going to get the opportunity to connect with her brother, as we have located him. Ruth had the whole room in tears as she was excited to visit with her brother at least one more time.”

The second bucket list item completed at Dells Nursing and Rehab was getting Violet, a resident at the facility, to Christmas Eve service to see her grandson sing and play piano.  “This one was easier to plan, but we still needed staff to step up and make this happen,” Runge said.  “Thanks to Beth Koedam, Social Services, she took time to get Violet to and from the Christmas Eve service. Violet had a great time and came back all smiles.”

The third bucket list item completed needed some extra creativity from the MDS Coordinator, Tracy.  Resident Ardis wanted to visit Hawaii!  “Little did Ardis know, we were going to bring Hawaii to her,” Runge explained.  “Tracy lined up a whole day of activities to make it feel as if Ardis was in Hawaii. Some of the activities included whale watching, Hawaiian food (bacon wrapped pineapple), Hawaiian documentary, and a photo booth.  We ended the night with a great performance from the Hip Hop Shop presenting a luau dance for us! Ardis’s family members were invited as well for this festivities.”

The latest bucket list event completed was for Mike, a retired Navy Submarines Veteran.  “One of Mike’s Navy veteran friends contacted us informing us that Dakota State University was going to broadcast the USS South Dakota Commissioning,” Runge said.  “Mike’s friend knew how much this would mean for Mike to be there with all his former submarine friends and watch this live on the big screen!” Marissa, Activity Director, was able to take him on this trip. “There were several moments during this visit I was able to witness that I will remember forever,” Runge expressed.  “One in specific was when the color guard was presenting the flag and the National Anthem began. Mike was in attention and wanted to stand. Mike’s friend and I helped Mike stand up during this time. Halfway through the National Anthem, I could feel Mike becoming weak as his legs were shaky. I whispered to Mike, ‘Mike would you like to sit down and rest?’ Without even thinking, Mike began to sing the National Anthem louder pretending not to hear me! Mike did not sit down until the Anthem was over as he knew what the National Anthem meant to him.”

“I think the biggest change I have noticed is the residents talking about who is going to be the next bucket list person, or what is the next idea going to be! The residents get so excited when they find out who’s bucket list is getting checked off!” Runge expressed. “Especially during the winter months. This has really helped change the culture and helped them break up this long winter time. Change can be hard for many people, but this change has been nothing but pure excitement for all!”

“The biggest thing is if anyone has ideas for the residents of what might be on their bucket list to let us know. Sometimes it can become hard for residents to think of something on their bucket list until someone reminds them of a situation,” Runge answered about needing help from the community.  “Of course when we are fulfilling bucket list items, we sometimes reach out for outside help such as the Hip Hop Shop performing the luau for us. Each situation is so different, so it is hard to come up with one idea, but I will be posting on Facebook of any needs we may need during this creative time!” 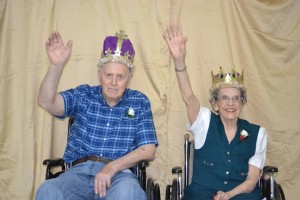 Dells Nursing and Rehab Center held their annual “Senior Prom” on Saturday, February 20th.  The event was open to families of the residents to join together for a formal afternoon of photo taking, special music by Linda Johnson, and numerous appetizers and champagne.  The program ended with the crowning of the king and queen, who were voted on by staff, family, and visitors.

The new king and queen are Don Ljunggren and Aloha King.

Dell Rapids is getting a new baseball field.  Dells Nursing and Rehab Center is doing work to the northwest corner of their proper so baseball or softball can be played in that spot.

Chad Stroschein, owner of Dells Nursing and Rehab Center, approached the Dell Rapids Little League about the idea of creating this field in the open space by the facility last year after the baseball season had ended.  He noticed the difficulties in finding field time for the 30 to 40 youth baseball (ages 6-12), softball (ages 6-14), and T-ball (ages 4-5) teams Dell Rapids has every year.  The idea was met with excitement by all the board members.  As spring time approached, Stroschein, also a Dell Rapids Little League board member, again brought up the plans to make the space a playable field.

Work has been ongoing since the snow melt to get the field ready to go by the time youth baseball and softball seasons start at the end of May.  The extra field space will be used by Dell Rapids youth teams along with fields A, B and C at city park on the north side of the river, fields E and F on the south side of the river, Brown Park, and the St Mary field just east of St Mary School.

Not only will this help the youth leagues, it will be an added bonus to the residents who will be able to watch games all summer long, which Stroschein said they will enjoy all season.

The Dells Nursing and Rehab Center’s annual Easter Egg hunt was a great success on Saturday, April 4th.  The event got underway at

11:00 a.m. and was held for children ages eight and under.  The Easter Egg hunt was divided into different age groups, and each age group had a golden Easter Egg winner.  Children attending were also able to get a picture with the Easter Bunny and have their face painted. 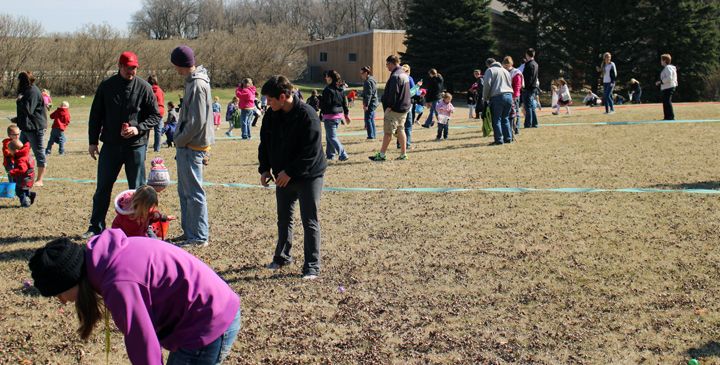 The Dells Nursing and Rehab Center held a “Senior Prom” for their residents on Sunday, February 22nd.  The event was held from 2:00 – 4:oo p.m.  Champagne and appetizers were served, and there was also a crowning of the 2015 Sweethearts.

Decorations, corsages, dresses, jackets, and many other items were donated to make the event a success.  Kerri Deats helped the residents with hair for the event.  Shane Skinner provided the music.  The 2015 Sweethearts crowned were Arnold and Nita Heinemann. 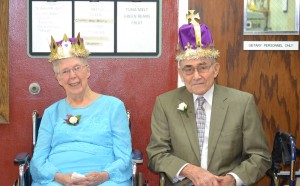 Maranda Koernke, Activity Director at Dell Rapids Nursing and Rehab Center, said, “Thank you to our wonderful team and families at DNRC for your hard work and dedication to making everyday special for our residents.”

More pictures from the event can be found on their Facebook page, https://www.facebook.com/DellsNursingAndRehabCenter. 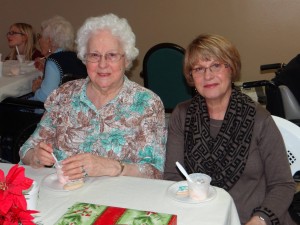 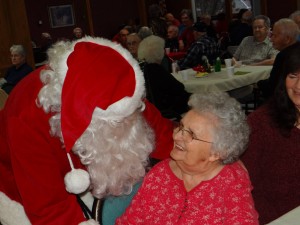 More pictures of the Christmas Party can be found by clicking here. 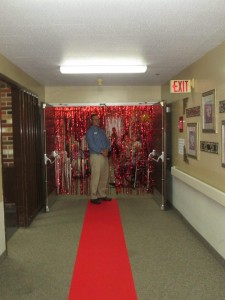 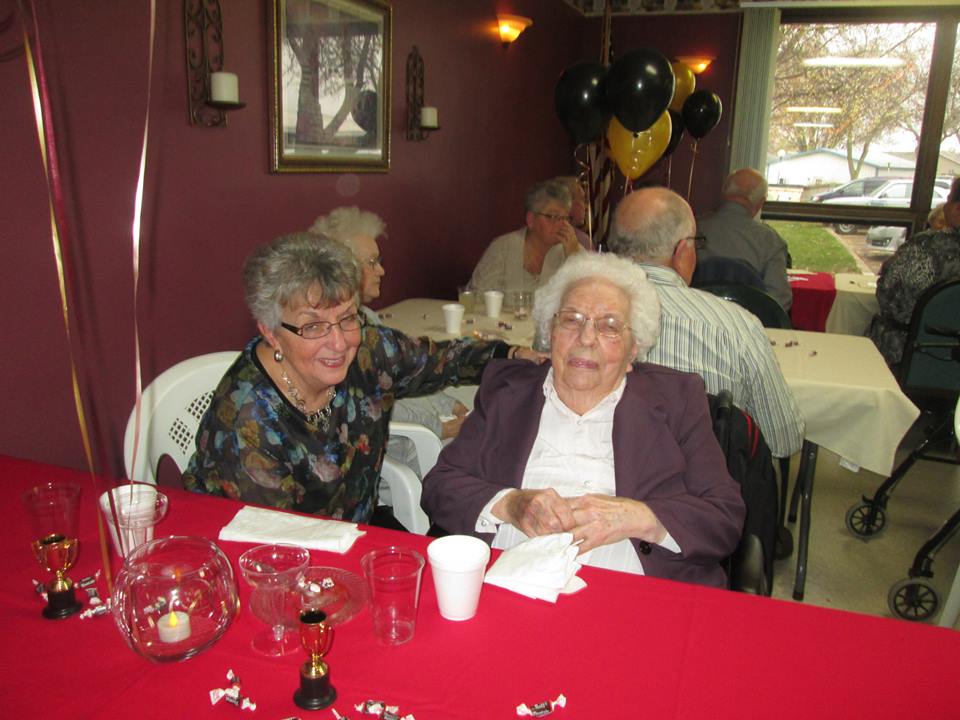 This week, May 11-17, is National Nursing Home Week.  This year’s theme is “Living the Aloha Spirit.”  Dells Nursing and Rehab Center has been doing theme days for their staff all week.  Monday was Hawaiian Shirt Day.  Tuesday was Hat Day.  Wednesday was Farmer Day.  Thursday is Wacky Hair Day, and Friday is Wear Your Favorite Scrubs Day.

Staff and residents will be having fun activities.  They will be making leis, coconut bowling, Hawaiian warrior, making fudge, and smacking a piñata.

In Hawaii, the word  “aloha” has a deeper significance than a simple greeting or farewell. In Hawaiian culture it is important to treat yourself and others with aloha, to interact with love and respect and joyfully share life. By applying this spirit of aloha to daily life, the people of Hawaii are encouraged to treats others with deep care, respect and humility, leading to individuals creating a better world.  Key concepts of aloha spirit include unity, kindness, truthfulness, humility, and patience.

The Dell Rapids Nursing and Rehab Center is planning a Valentine’s Day party for their residents on February 23rd.  In preparation for the event, Dell Rapids Nursing and Rehab Center is asking for help.  They are seeking donations of women’s formal or bridesmaid dresses and men’s suit coats and ties.  All sizes are welcome.  Donations can be dropped off at the facility nurse’s station.  Please note that the dresses need to be long, and many of the residents are old-fashioned and very modest. 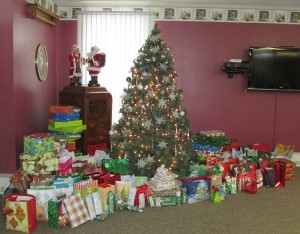 The residents at Dells Nursing and Rehab Center received lots of Christmas cheer this year at their Christmas party.  Dells Nursing and Rehab Center teamed up with County Fair Foods and placed a wish tree at County Fair Foods.  The response from the community was amazing.  Not only was the wish tree fulfilled, but St. Mary Catholic Church donated a shirt for every resident, and the center received many other donations.  With all of the donations received, every resident received two gifts each from under the tree, and the Christmas party was a huge success. 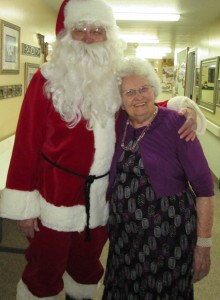 Everyone at Dells Nursing and Rehab Center would like to thank the community for truly making the holidays special!