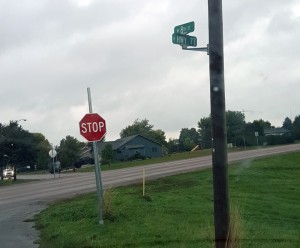 Work has begun in Dell Rapids to replace the street signs throughout the community.  During the Dell Rapids City Council’s regular meeting on Monday, October 3rd, City Administrator Justin Weiland mentioned to the council that work on this project just began suddenly, however this project has been discussed for the past two years.

The county hired engineers to GPS all the locations the signs need to be placed.  The engineering firm has studied all of the new standards of signage, and because of the new standards, some of the signs in Dell Rapids will be placed in different locations to meet those new standards.  One of the big changes will be street signs will no longer be on light poles.  That is no longer an approved placement for signs.  Taller posts are being installed for stop signs, and street signs will be placed on top of those posts.  Weiland stated that the old signs won’t come down until all the new signs are in place.

Weiland also said that the city has been provided a map of everything that is being replaced to make sure everything is replaced correctly.  He said that the biggest change is that the school zone signs around River Community Church (old elementary school building) will be coming down and will not be replaced.