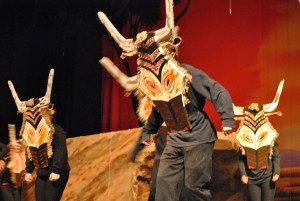 The Dell Rapids Drama department’s musical performance of ‘The Lion King’ drew big numbers over five days.  The musical, directed by Sharon Mitchell and Robert Michalscheck, played to over 1,500 people.

The students performed for the elementary school on Thursday, May 11th.  They followed that with a performance for the middle and high school on Friday, May 12th, in the afternoon.  The first public showing was the evening of May 12th.  They held another show on Saturday, May 13th, and a final show in the afternoon on Sunday,  May 14th.

There were 70 students that were in the play.  Not only was there a large number of students that performed, there were many more along with family and community members that helped in building sets and making 150 handmade costumes.

All of the comments about the performance on social media and around town have been praising the students about how well the play was done.