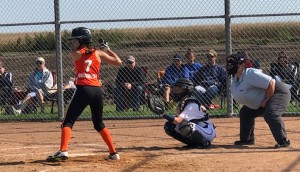 Dell Rapids got on the board early in the first game when Rileigh Foster hit a home run to lead off the game.  Foster collected multiple hits in the game along with Abby Greenhoff, Kenzie Garry, and Haileigh Barnhart.  Kylie Bittner was the winning pitcher as she allowed four hits and four runs over 5 2/3 innings while walking just one batter.

In the second game against Winner, Autumn Tomes and Katrina Kruel shared the pitching duties.  Kruel ended with three strikes out in her two innings of work.  Garry was 2-2 at the plate in the second game.  Dell Rapids had a total of eight hits in the game.

The season for the Dell Rapids Q’s JV team comes to an end with the end-of-the-season tournament this coming weekend. 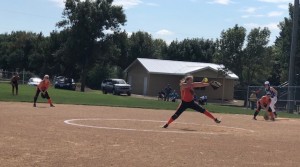 In the first game of the day, Dell Rapids defeated Lennox 5-1.  Jaycee Tebay homered in the first inning to score two runs.  Autumn Tomes was the winning pitcher in the game.  Tomes allowed just one run on four hits over six innings while striking out six batters.  Tebay, Haileigh Barnhart, and Abby Greenhoff all had multiple hits in the game.

Dell Rapids then defeated Garretson 5-4 in the second game.  Kylie Bittner was the winning pitching as she went six innings allowing four runs on seven hits with six strikeouts.  Kenzie Garry and Bittner had multiple hits in the game.  Garry finished 3-3 at the plate to lead the team.  Barnhart was great in the outfield with several catches covering a lot of ground.

This Dell Rapids JV team is now 4-0 on the season.