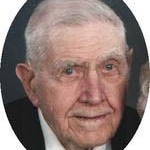 Benjamin Abraham, age 94, of Ramona, died Thursday, May 24, 2012, at Madison Community Hospital.  Benjamin George Abraham was born September 17, 1917, on the farm near Ramona, to Otto and Bertha (Brinkman) Abraham.  He attended Abraham Country School and served in the US Army during World War II as Private First Class.  Ben married Olga Janke on April 10, 1947, at Madison.  They farmed in the Ramona area.  Ben was a life-long member of St. John Lutheran Church where he had served as deacon.

He was preceded in death by his parents, one sister Ada Abraham and two brothers, Myron and Arthur Abraham.  Survivors include his wife Olga of Ramona; one son, Allen (Beth) Abraham of Ramona; two daughters, Barbara (Dave) Klein of Dell Rapids and Jolene (Randy) Williams of Sioux Falls; 11 grandchildren; 10 great grandchildren; and one sister Betty Barnum of Inyokern, CA.

In lieu of flowers, the family requests memorials be directed to St. John Lutheran Cemetery.  http://www.ellsworthfh.com