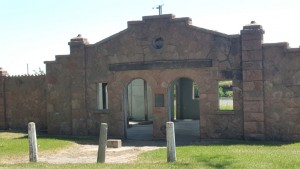 “The main purpose of the meeting was to get them (SHPO) to look at these renderings and tell us they had a comfort level of approving them because it’s on the historical registry.  We have to get their approval,” Weiland said to the council during the city council meeting.  “It was a positive meeting.  The governor and his wife responded very positively to the use that is being proposed at this time.” 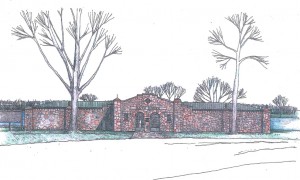 There were a couple of proposed ideas for uses of a renovated bath house.  One idea is to develop a museum within the walls of the interior of the bath house that would provide information through narratives and photographs of the history of quartzite rock in Dell Rapids.  Printed wall panels could be used to portray the history of the quarries as well as the buildings in Dell Rapids that have been built with quartzite.

The other proposed use of the building would be as a public gathering space for family reunions, group gatherings, and other like events.  There could be tables and chairs inside of the building with power for crock pots.  The bath house could then be made available for reservation similar to the building in the northwest corner of the park that is used today.

“I think it’s an important thing to do.  Our community has more younger families moving into the community.  I suspect there is a significant part of the community that know there are quarries here, but haven’t got a clue as to what the role those quarries have played in the history of this community,” Mayor Earley mentioned during the council meeting.

Mayor Earley also noted Governor Daugaard has sent his fundraising process document to city administration.  He also said that fundraising efforts for this project could run similar to the library renovation and expansion project.

“We will be continuing to work on this and hopefully, at some point, we’ll get there.  I think the state historical people appreciate the fact of what we are trying to do in terms of preserving the old bath house,” said Mayor Earley.