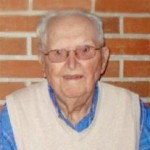 Alfred was born on September 29, 1911 to Albert and Alice (Lodahl) Hauglid in Jasper, MN. He was baptized and confirmed in the Lutheran Faith in Jasper. On September 29, 1934, he was united in marriage to Iola Hoime in Jasper. Following their marriage, they resided in Jasper where Alfred was employed at Jasper Farmers Elevator and became manager in 1942. Iola preceded him in death on December 20, 1971. Alfred was united in marriage to Carita (Kay) Hoagland in 1974. After he retired in 1976, they spent the next 20 winters in Arizona. In 1997, they moved into Sunrise Assisted Living in Jasper. On October 8, 2000, Kay preceded him in death. Following her death, Alfred continued living at Sunrise. He died at the Pipestone County Medical Center on Monday, June 18, 2012 at the age of 100 years, eight months and 20 days.