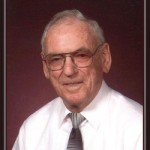 Al Grovenburg, age 80, of Watertown, SD passed away on Saturday, June 23, 2012 at a care center in Dell Rapids, SD. Funeral services will be at 11:00 a.m. Thursday, June 28, 2012 at the First United Methodist Church with Reverend Elmer Brinkman officiating. Don Seim will be the soloist accompanied by Blair Titze. Interment will be in the Thomas Oxford Cemetery, Thomas, SD. Military Honors will be conducted by the South Dakota State Patrol, Codington County Post 17 of the American Legion and Watertown Army National Guard Funeral Honors Team. Visitation will be from 5-8 p.m. on Wednesday at the Wight, Comes & Sogn Funeral Chapel and on Thursday for one hour prior to the service at the church.

Albert A. Grovenburg was born on February 14, 1932 to Ward and Pansy (Devor) Grovenburg at Seneca, Kansas. At the age of nine he moved with his family to South Dakota. Al graduated from Watertown High School in 1949. Al married Jean Hunter on May 28, 1953 at Thomas, SD. He joined the United States Army and served from 1955-1958. After his discharge from his military service, he became a partner in Wynn’s Potato Chips from 1958-1966. Al then began his law enforcement career serving at Armour, Milbank and Watertown.

Al and Jean owned Loken’s Tax Service from 1967-1995. Al was a charter bus driver for Roy & Wilma Tours of Mitchell, SD and Jackrabbit Lines of Sioux Falls. Al was a member of the First United Methodist Church, South Dakota Highway Patrol Retirees and a Life member of the American Legion. He was a avid bowler and was inducted into the Watertown Bowler’s Hall of Fame, was a Twins Fan, and enjoyed hunting, fishing and golfing.