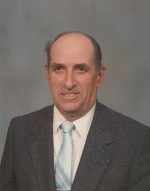 Adrian Van Liere, 88, of Dell Rapids passed away peacefully in his sleep on Thursday, February 07, 2013 at his home.

Funeral services will begin at 1:00 PM Monday, February 11, 2013 at the Reformed Church in Dell Rapids. Burial will be in the Dell Rapids Cemetery. Visitation with the family present will be from 2:00 to 4:00 PM Sunday at Minnehaha Funeral Home in Dell Rapids.

Adrian Van Liere was born on March 28, 1924, to Pete and Dena (Van Hunnik) Van Liere of Colton SD, where he grew up and attended school. Adrian was drafted into the Army and sworn in on April, 4, 1945. He and his brother, John were sent to Japan for a year with the Occupation Force and worked in the Ordinance Company. He was honorably discharged in December, 1946. Upon returning home, he married his first wife, Frances Reurink and started farming. He was widowed soon after. He later married Jeanette Bos, his wife of 60 years, on June 21, 1949. They bought a farm with a dairy operation northwest of Dell Rapids, which prospered under Adrian’s careful management. Together they raised their own eight children and two of Jeanette’s brothers. Upon retirement, they moved into Dell Rapids.

Adrian built many friendships over the years; bowling, playing softball, going to farm sales, playing pool and cards and socializing over a cup of coffee. He was a continuous member of the Dell Rapids Post of the American Legion. He loved to fish and roller skate with his kids, and enjoyed taking his grandchildren to Cootie Days and Quarry Days. Adrian kept his dry sense of humor and sharp wit to the end.