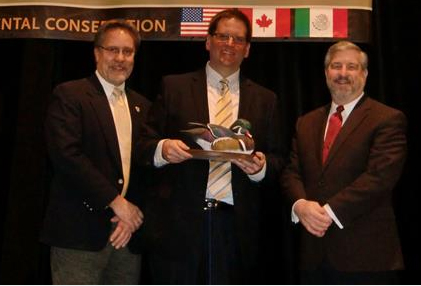 “John is a regular contributor to The Argus Leader newspaper in Sioux Falls and also provides a bimonthly report for the Minnesota Outdoor News,” said DU Chief Conservation Officer Paul Schmidt. “Through his writing and radio shows, John has captivated audiences and engaged sportsmen and women on key issues influencing the future of habitat resources, wildlife populations and our hunting traditions.”

A 2012 recipient of the John Madson Fellowship from the Outdoor Writers Association of America, Pollmann’s stories have been published in national magazines such as Field & Stream, Ducks Unlimited and American Waterfowler. He is also the former host of Dakota Outdoors Radio, an hour-long weekly show that featured hunting, fishing, camping and outdoor recreational opportunities in South Dakota.

“His recent publications on wetland loss, native prairie conversion and farm bill policy have helped raise greater awareness and engagement among the conservation community and policy makers. John has been a true conservation champion and a voice for sportsmen on these issues.”

Pollmann was also recently made a member of the nation’s first-ever conservation pro staff for the new Vanishing Paradise initiative, on which DU is a partner. Through his volunteer position with the organization, Pollmann will help raise greater public awareness about efforts to protect and rebuild the coastal marshes of Louisiana.

Ducks Unlimited Inc. is the world’s largest non-profit organization dedicated to conserving North America’s continually disappearing waterfowl habitats. Established in 1937, Ducks Unlimited has conserved more than 13 million acres thanks to contributions from more than a million supporters across the continent. Guided by science and dedicated to program efficiency, DU works toward the vision of wetlands sufficient to fill the skies with waterfowl today, tomorrow and forever. For more information on our work, visit www.ducks.org. Connect with us on our Facebook page at facebook.com/DucksUnlimited, follow our tweets at twitter.com/DucksUnlimited and watch DU videos at youtube.com/DucksUnlimitedInc.