During the Dell Rapids City Council’s last regular meeting on Monday, June 5th, the council received the news that the 10th street project was substantially complete.  The street was opened to traffic starting on Friday, June 2nd.  The final walk-thru of the project took place on Tuesday, June 6th.

Dell Rapids Mayor Tom Earley said, “I think right now would be very appropriate on my part to recognize the fact that 10th street wouldn’t maybe be there if it hadn’t been for Mr. Geraets and Mr. Crisp.  We appreciate the initiative they took and the work you guys did to get it going.  It’s a very visible project in town…  They’ve done a nice job up there and it looks nice.”

With the completion of the project, the council approved a pay request from T&R Contracting on the project.

During the Dell Rapids City Council’s Regular Meeting on Monday, September 19th, City Administrator Justin Weiland gave an update to the council on the 10th Street project.  Weiland mentioned that work is continuing for the project, and the utility sub-contractor is reporting that utility work should be complete within the next week.  Grading work is also being finished in front of the hospital to reach final grade.

The current plan of the project is to finish everything, including the curb and gutter and paving of the road in front of the hospital over the next couple of weeks.  The rest of the 10th Street project west of the hospital will be to only lay gravel on the street and let it set during the winter.  The curb and gutter, sidewalk, and paving will all occur in the spring of 2017.  After the utility work is complete and the gravel is in place on 10th Street, the street will be open throughout the winter months.

The 10th Street project has officially started.  A pre-construction meeting was held on Tuesday, August 9th with T&R Contracting, their subcontractor, the city, DGR, and the property owners affected by the project.

All of the questions from the property owners were answered, and the city has received all the needed permanent and temporary easements associated with the project.

“T&R Contracting is full bore and ready to go.  The signs got placed, and they are starting removals.  10th Street is now officially closed.  They (T&R Contracting) provided a schedule that shows them completing it this year, that’s if everything falls in place perfectly.  I’d anticipate that probably won’t happen, but that’s the initial schedule they provided us with,” commented Weiland. 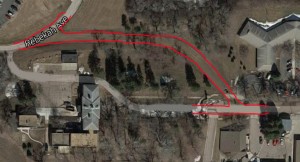 The Dell Rapids City Council made a recommendation for potential property-owner assessments for the 10th Street Improvement project.  The project will improve the street between Orchard Hills and Iowa Ave as well as utilities, drainage, sidewalk, driveway approaches, and retaining walls.  The project is estimated to cost around $1.05 million.

The city received a grant from the Department of Transportation in the amount of $400,000 for the project.  The Dell Rapids City Council discussed different options for assessments to fund the cost of the project during it’s regular meeting on Monday, December 21st.

City Councilman Mark Crisp noted, “The land to the south side of 10th street…is prime development land, and also to the east of Orchard Hills, there’s more developable land.  So you think the taxpayers should pay for that, and not the developers?  Then I would say turn the clock back to 15th street.  There was some haggling and negotiating back and forth, and we came to a compromise.  Did I want that street?  No.  Did I want the assessment?  No.  But I was a developer along that, and for the future for the City of Dell Rapids, we came to an agreement and the street was put in.  It is no different than this situation right here.  Do I think the full assessment should probably be put on the owners?   No, but I think the fairest to the taxpayers would be the second option.”

The second option discussed by the council is to apply the $400,000 DOT grant to the cost of the project, which will cover 38% of the total cost.  The remaining amount of the project would then be assessed to the property owners along the street.

The roll-call vote passed unanimously for this option as the recommendation from the council to move forward on the assessment of the project.