The Dell Rapids Quarriers, ranked #1 in the latest 11A football polls, knocked off the West Central Trojans (#2 11A) in Hartford Friday, September 7th.  Each team scored in the first 1:30 of the game. 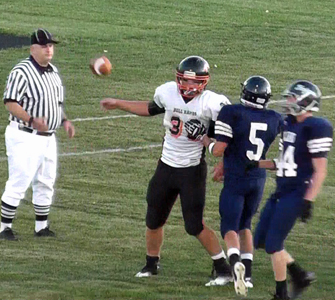 Dell Rapids took the opening kickoff, and turned the ball over on a fumble on the first offensive play of the game.  Three plays later the Trojans were in the end zone and had a 7-0 lead.  But Riley Schmidt took the following kickoff all the way in for a touchdown, and the Quarriers trailed 7-6 about 1:30 into the game.  Dell Rapids would add two more touchdowns in the first half on runs by Cole Langer to take a 20-7 lead into halftime. 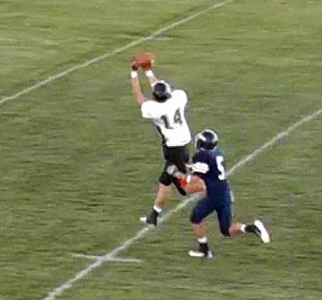 Bryce Koch with a great catch in 2nd Quarter.

West Central scored the first touchdown of the second half on a 1-yard run by Eric Krizan about mid way through the 3rd quarter to close the gap 20-14.  The Quarriers would add a touchdown early in the 4th on a 12-yard pass from Matt Kolbeck to Bryce Koch.  The Quarrier defense would hold the Trojans the rest of the game for a 28-14 road win.

Dell Rapids had 328 yards of total offense while holding West Central to 146 yards.  Langer had 23 carries for 161 yards rushing and two touchdowns.  Lane LeBrun had 11 carries for 57 yards.  Kolbeck was 3-10 passing for 71 yards and a touchdown.  Koch had three catches for 71 yards and a touchdown.  Schmidt had a catch for 17 yards as well.  Defensively, the Quarriers were led by Langer who had 8.5 tackles and three assists.  LeBrun had 4.5 tackles and three assists.  Peter Nebben added 4.0 tackles and two assists.  Zach White had an interception.

Dell Rapids moved to 2-0 on the year, and will host Madison on Friday, September 14th.

Kneel down for the win.