The Dell Rapids Quarriers defeated the #1 team and only undefeated team at the time in class 11A on Friday, October 5th.  Dell Rapids beat the Dakota Valley Panthers 37-19 at Dakota Valley.  The game was back and forth in the first half, but Dell Rapids put the game away with a strong second half. 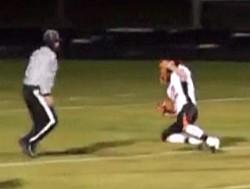 Schmidt for a 12-7 lead.  Likness and the Panthers would take the lead back at 13-12 after a quarterback sneak into the endzone and a failed extra point attempt.  After a fourth down conversion, Schmidt found the endzone again, this time on the ground to give the lead back to the Quarriers 18-13.  Dakota Valley again answered with a touchdown pass from Likness to Brody VanGinkle to give the Panthers a 19-18 lead late in the second quarter.  The Quarriers would score one more time before halftime on a fourth and goal touchdown pass from Kolbeck to Schmidt for Schmidt’s third touchdown of the half.  Dell Rapids lead 24-19 at halftime.  The Quarriers would add two more scores in the second half on touchdown runs by Schmidt and Ryan Nichols.  The Dell Rapids defense held the Panther offense scoreless in the second half for the 37-19 win.

Dell Rapids put up 392 yards of offense while holding the Panthers to 237 total yards of offense.  The Quarriers picked up 18 first downs and had the ball for nearly 30:00 of the game.  Schmidt carried the ball eight times for 80 yards and two touchdowns.  Langer had four carries for 54 yards and had one reception for a 41-yard touchdown before leaving the game late in the first quarter with an injury.  R. Nichols had 10 carries for 37 yards and a touchdown.  Kolbeck was 7-13 passing for 155 yards, three touchdowns, and two interceptions.  Schmidt had four catches for 66 yards and two touchdowns.  Bryce Koch had two catches for 45 yards.  The defense was led by Colin LeBrun with 6.5 tackles.  Nathan Koens, Koch, and Cody Nielsen each had 4.0 tackles. Brett Nichols and Schmidt each had an interception.

The win moves the Quarriers to 5-1 on the year.  Dell Rapids will host Sisseton on Friday, October 12th.