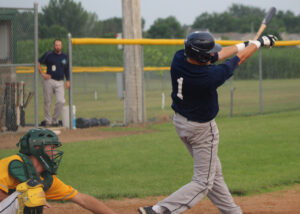 The Dell Rapids Mudcats traveled to Colman on Tuesday, July 13th for a make-up game from July 6th.  Dell Rapids broke a 2-2 tie in the fifth and eventually pulled away for a 7-2 win.

Henry had two hits, including a home run, and two RBIs. Freudenthal also had two hits and two RBIs. Ty Hoglund and Mark Abrahamson both had two hits. Hunt and Kris Regas both had a single. Olson had an RBI. Abrahamson pitched eight innings for the win giving up two runs on four hits with 11 strikeouts. John Spaeth pitched an inning without allowing a hit.