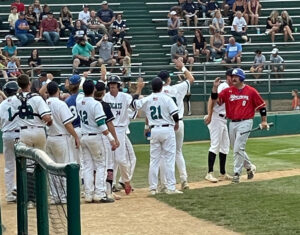 The Dell Rapids Mudcats had no trouble in the opening round of the 2021 South Dakota State B Amateur Baseball Tournament in Mitchell on Friday, August 6th.  The Mudcats scored in every inning but one in a 15-0 victory over the Lake Norden Lakers.

Dell Rapids had a total of 17 hits in the game while Kris Regas held Lake Norden to just two hits with 13 strikeouts while pitching all six innings of the game.

Chad Hunt had four hits and an RBI.  Trevor Freudenthal had three hits while driving home six runs.  Mark Abrahamson had two hits, one a double, and two RBIs.  Josh Roemen had two hits and two RBIs.  Nate Henry and Ty Hoglund both had two hits in the game.  Matt Burpee (Madison pick-up player) and Grant Olson each collected a hit.

The Mudcats will play Wynot in the second round on Tuesday, August 10th at 5:30 p.m. in Mitchell.