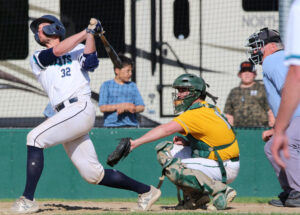 The Dell Rapids Mudcats won their 2022 Cornbelt League season opener on Sunday, May 15th at Rickeman Field.  The Mudcats held off a rally by the Colman A’s for a 7-5 victory.

Colman got a run in the top of the fourth inning, but the Mudcats answered with two more runs in their half of the fourth.  Grant Olson had an RBI single, and Trevor Freudenthal scored on a wild pitch.  Both teams scored two runs in the fifth inning.  Josh Roemen and Lehnen each had RBI doubles in the inning, and the Mudcats led 7-3.  Colman scored two more times in the top of the eighth inning, but couldn’t get any rally started in the ninth.

Lehnen had three hits, including a double, and two RBIs.  Ty Hoglund had three singles.  Regas had a home run and an RBI.  Roemen and Abrahamson each had a double and an RBI.  Olson finished with a single and an RBI.  Freudenthal also had a hit. Lehnen pitched three innings allowing just one hit while striking out six to earn the win.  Dalton Allen pitched three innings and allowed three runs on three hits with five strikeouts.  John Speath pitched 1 1/3 innings allowing two runs on three hits with a strikeout.  Regas pitched 1 2/3 innings striking out four batters.