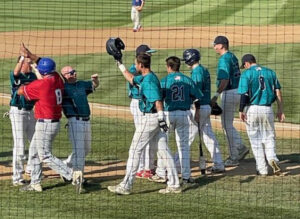 The Dell Rapids Mudcats took another step closer to a state title with a 13-5 second round win over Wynot at the 2021 South Dakota Class B Amateur Baseball Tournament in Mitchell on Tuesday, August 10th.

Wynot jumped out to a quick 4-0 lead in the top of the first inning, but Mark Abrahamson sparked the Mudcat offense with a three-run home run in the bottom of the inning to cut the lead to 4-3.  Abrahamson struck again in the bottom of the fourth inning with a solo home run to tie the game 4-4.  The Mudcats rallied from there scoring nine more times while holding Wynot to just one more run for the win to advance to the quarterfinals.

The Mudcats will play Larchwood in the quarterfinals on Friday, August 13th at 5:30 p.m. in Mitchell.