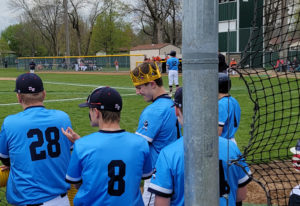 A fourth-inning grand slam home run by Dylan Mathis electrified the Dell Rapids players and fans and helped spark a 9-5 win over Lennox on Sunday, May 9th in Lennox.

Lennox got a two runs in the bottom of the second inning to break the scoreless tie.  One run scored on a passed ball, and the other scored on a double to give Lennox a 2-0 lead after three innings of play.

Dell Rapids took advantage of a two-out error by Lennox in the top of the third inning.  Austin Henry followed the error with an RBI single, only the second hit of the game to that point for Dell Rapids.  That run scored made the score 2-1.

The offense then came alive for Dell Rapids in the top of the fourth inning.  Jack Henry hit a one-out single to deep shortstop.  After a passed ball, Aiden Boechler followed with a single to left field.  Will Jaton drew a walk to load the bases with one out.  Mathis then connected on a 2-0 pitch and sent the ball over the left field fence for the grand slam home run to give Dell Rapids a 5-2 lead.  The home run also fired up the Dell Rapids defense.

Lennox put together a threat in the bottom of the fifth after a lead-off single followed by a walk.  A. Henry was able to get a force out at third base on an attempted bunt, keeping runners at just first and second.  The next batter lined a single to center field to load the bases for Lennox with just one out.  Dell Rapids then pulled off a 3-6-3 double play to end the inning to keep the score 5-2.  Lennox did scratch another run across the plate in the bottom of the sixth on a sacrifice fly to cut the lead to 5-3 heading into the final inning.

Dell Rapids then started the seventh inning with three straight hits and then a Lennox error, and all of the sudden Dell Rapids was ahead 8-3.  J. Henry scored on a wild pitch to make the score 9-3.  Lennox did get a two-run home run in the bottom of the seventh, but it wasn’t enough as Dell Rapids finished the game there at 9-5.

Mathis finished 1-3 at the plate with the home run and four RBIs.  A. Henry had three hits, including a double, and an RBI.  Landon Ruesink had a double.  Kaeden Eastman finished with two hits and two RBIs.  J. Henry had three hits in the game.  Treyse Eastman, Boechler, and Jaton each had a single.