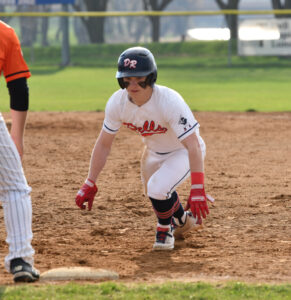 Leading 2-1 late in the game, Dell Rapids added three more runs in the bottom of the fifth to secure a 5-1 Mother’s Day win over Lennox on Sunday, May 8th at Rickeman Field.

Dylan Mathis put Dell Rapids on the board with an RBI triple in the bottom of the first inning.  Another run was added in the bottom of the third on an RBI single by Landon Ruesink.  Lennox scratched a run across the plate in the top of the fourth inning without a hit.  They had a hit battered followed by three straight walks for their run.

With one out in the bottom of the fifth, Dell Rapids scored three times to put the game out of reach.  Aiden Boechler had a two run single to right field, and Treyse Eastman reached on an error that scored Boechler.  The defense shined for Dell Rapids in the top of the sixth.  After a leadoff triple by Lennox, CJ Smith scooped a ground ball and threw a perfect throw to Eastman to get the runner out at home.  Dell Rapids then turned a double play one batter later to get out of the inning.

Ruesink had three of the seven hits for Dell Rapids and an RBI.  Mathis had a triple and an RBI.  Boechler finished with a hit and two RBIs.  Brayden Pankonen and Eastman both had a single.  Jack Henry pitched a complete game throwing seven innings while allowing one run on four hits and four walks with nine strikeouts.