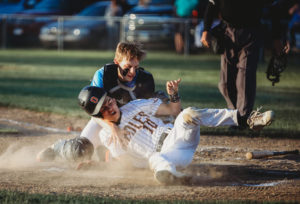 The Dell Rapids high school baseball team had their backs to the wall on Tuesday, May 25th, but scored three times in the final inning to secure a spot in the state tournament with a 6-5 come-from-behind win over Lennox.

Dell Rapids entered the Region 3B tournament as the #1 seed and was able to host three games at Rickeman Field.  They opened the tournament against #8 Tri-Valley on Tuesday afternoon and advanced to the final game with a 10-0 win in six innings.

Dell Rapids scored in every inning but the second inning, including three runs in the third and four more in the bottom of the sixth with two outs to end the game on the 10-run rule.  Jack Henry had a solid game on the mound pitching all six innings while only allowing two hits with two walks and 13 strikeouts.

Brayden Pankonen had two hits and an RBI.  Kaeden Eastman had a hit and an RBI.  Landon Ruesink, J. Henry, and Will Jaton all had an RBI in the game.  Treyse Eastman had Aiden Boechler both had singles.

Dell Rapids then faced #4 Lennox in a hard-fought, close game for a chance to move on to the state tournament.

Dell Rapids, with only five hits in the game, took advantage of their limited time on the base paths.   Aiden Boechler singled in the bottom of the second inning, stole second and third, and then scored on a wild pitch to tie the game 1-1.  T. Eastman reached base on an error to start the bottom of the third inning.  He advanced to third base on two passed balls, and then scored on a sacrifice fly by Austin Henry to give Dell Rapids a 2-1 lead.  The third run came in the bottom of the fourth inning.  K. Eastman drew a lead-off walk and stole second and third base.  He later scored on an RBI single by Jaton, and Dell Rapids led 3-1 after four innings of play.

A. Henry kept Lennox off balance enough through five innings on the mound.  He never allowed a hit, and only gave up the one run in the first inning.  A. Henry throw 106 pitches in five innings of work while walking seven and striking out 12 batters.

Lennox was happy to see a new pitcher.  Pankonen pitched the sixth inning, and Lennox got the first three guys on base with two walks and a single.  A fielder’s choice ground out cut the lead to 3-2, but Peyton Eich drove home the trying run with an RBI single.  T. Eastman then took to the mound in the top of the seventh inning with the game tied 3-3.  After getting the first batter out, the next batter reached on an error.  Lennox then followed with two singles and a walk, and took the lead 5-3.  T. Eastman was able to get the last two batters out on strikeouts to keep the score 5-3 heading into the bottom of the seventh inning.

After the first batter was retired, things turned in Dell Rapids’ favor.  Jaton walked, Dylan Mathis was hit by a pitch, and T. Eastman walked to load the bases with one out.  Pankonen then drew a walk to bring home one run to cut the lead to 5-4.  Austin Henry followed with a hard line drive single to left to tie the game, but T. Eastman was thrown out at home trying to score the winning run.  During the action at the plate, Pankonen wisely advanced to third giving Dell Rapids runners on first and third with two outs.  Landon Ruesink was intentionally walked to fill the bases for a force out at any base, bringing K. Eastman to the plate.  On a 1-1 pitch, Eastman hit a ground ball to second, but forced a hurried throw as he sprinted down the first base line.  The throw skipped in the dirt, and everyone was safe allowing Pankonen to cross home plate as the winning run.

A. Henry finished with two hits and two RBIs in the game.  Jaton had a hit and an RBI.  Pankonen was credited with an RBI.  Ruesink and Boechler both had hits in the game as well.  Pankonen pitched one inning giving up two runs on two hits with three walks and a strikeout.  T. Eastman pitched an inning allowing two runs on a hit with one walk and two strikeouts.

Dell Rapids will be play in the 2021 South Dakota High School Baseball Association State B Tournament held at Sioux Falls Stadium on Monday, May 31st and Tuesday, June 1st.