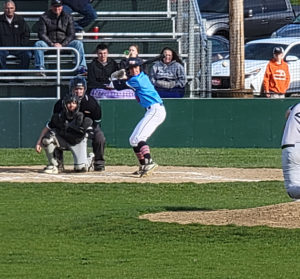 Austin Henry put together a dominate pitching performance against Sioux Falls Christian on Monday, May 3rd at Rickeman Field.  A. Henry threw six shutout innings allowing just one hit and four walks while striking out 16 batters.

The first inning offense was more than enough.  A. Henry helped himself with an RBI single in the bottom of the first.  Kaeden Eastman added an RBI sacrifice fly, and A. Henry later scored after Jack Henry got into a rundown between first and second base.  Dell Rapids led 3-0 after the first inning.

Pankonen was 3-4 in the game two two RBIs.  T. Eastman had two hits, including a double, with an RBI.  A. Henry and K. Eastman both had a hit and RBI.  Josh DeKnikker, J. Henry, and CJ Smith all had a hit as well.

Dell Rapids (10-5) will travel to Vermillion on Friday, May 7th.