The Dell Rapids Connections group held a kick-off event on Wednesday, September 4th, at the Dell Rapids High School.  The event was an assembly for students in grades 7 through 12 from Dell Rapids public and Dell Rapids St Mary.  Tom Henderson with Restoration Generation was the guest speaker at the assembly.  Also joining Henderson was hip-hop band F.O.G.  Henderson and the band also joined the students for lunch prior to the assembly.

Then in the evening, a free concert was held at City Park with Henderson, F.O.G., and Chris Heesch.

According to the Restoration Generation website, http://www.restoreageneration.com/, the group exists to restore broken relationships all around the world. 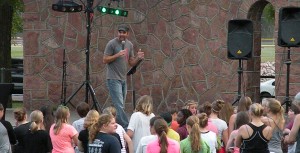