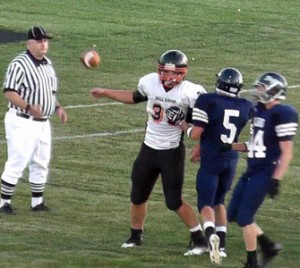 The 6-foot-2, 240-pound senior linebacker and fullback led the Quarriers to an 11-1 record and the Class A state championship this past season. Langer rushed for 874 yards and 15 touchdowns on 102 carries, and recorded 71 tackles along with three forced fumbles. He is a two-time First Team All-State selection and a member of the Argus Leader Elite 45 team.  Langer has maintained a 4.14 GPA in the classroom. A devoted member of his church community and the Fellowship of Christian Athletes, he has volunteered locally on behalf of youth sports programs and has served on his school’s student council.

“He can take over a game with just his hard running style,” said Craig Clayberg, head coach at Tea High. “When you have a player with his size, speed and body control, it’s very difficult for your defense to stop. One defensive player can’t bring him down—you need two, three or even four guys.”

Langer has verbally committed to play football on scholarship at South Dakota State University beginning in the fall of 2013.

The Gatorade Player of the Year program annually recognizes one winner in the District of Columbia and each of the 50 states that sanction high school football, girls volleyball, boys and girls cross country, boys and girls basketball, boys and girls soccer, baseball, softball, and boys and girls track & field, and awards one National Player of the Year in each sport. The selection process is administered by the Gatorade high school sports leadership team in partnership with USA TODAY High School Sports, which work with top sport-specific experts and a media advisory board of accomplished, veteran prep sports journalists to determine the state winners in each sport.