West Central defeated Dell Rapids/Baltic 5-2 in the first round of playoffs to advance. DR/Baltic was eliminated from the postseason and finished the year with a 5-3 record. 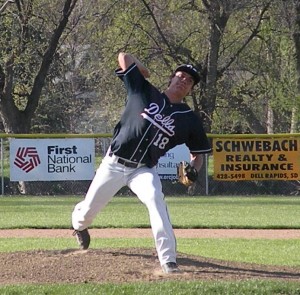 West Central scored first with two runs in the top of the third inning. Riley Danielsen doubled then Drew Maras and Andrew McMahon walked. Johannsen singled and both runners scored.

Mitch Roemen came on in relief of Nielsen and got DR/Baltic out the inning. However, West Central started the fourth with another double this time by Cameron Stone. An outfield error, sacrifice fly and double by Maras led to three runs and a 5-0 West Central lead.

DR/Baltic answered in the bottom half of the fourth. Beau Carpenter singled and scored from first on Roemen’s line drive double past the right fielder. Roemen advanced to third on the play at the plate and then scored on a wild pitch.

Neither team scored again as pitching and defense took over. Tanner Solberg came on in relief for DR/Baltic and blanked West Central for 2 2/3 innings. He allowed one hit and struck out four. West Central closer Gabe Wiezorek pitched the 7th and got all three hitters out to preserve a 5-2 win.

Pitchers from both teams each struck out 10 opposing hitters.

The win by West Central avenged two earlier season losses to DR/Baltic by scores of 6-1 and 3-0.

West Central plays the winner of Garretson/Tri-Valley in the next round of playoffs.

Catcher Matt Kolbeck catches a swing and a miss.