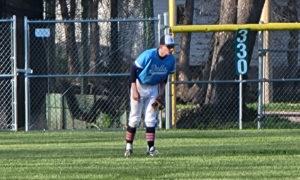 For four innings Dell Rapids and West Central were locked in a scoreless pitching duel at Rickeman Field on Monday, May 10th.  West Central finally broke the tie in the top of the fifth inning, but Dell Rapids scored three unanswered runs to win 3-1.

The two teams combined for just three hits through the first four innings of play.  Zach Madson led off the West Central fifth with a slow roller up the third base line for an infield single.  Madson advanced to third after an error on a throw over to first and then a passed ball.  Adam Parsons blooped a broken-bat single over a drawn-in infield for the first run of the game and a 1-0 lead for West Central.

Dell Rapids responded by getting the first three batters on base safely in the bottom of the fifth.  Brayden Pankonen drew a lead-off walk.  Austin Henry followed with a single, and Landon Ruesink tied the game with an RBI single.  A. Henry scored after an errant throw to second on a steal attempt by Ruesink.  That run gave Dell Rapids a 2-1 lead.  Dell Rapids added an insurance run in the bottom of the sixth on an RBI double by Ruesink.

A. Henry pitched a complete game giving up a run on three hits with five walks and 14 strikeouts.

Ruesink led the offense with two hits, one double, and two RBI.  Treyse Eastman, A. Henry, and Kaeden Eastman all had singles in the game.

Dell Rapids will host Beresford on Wednesday, May 12th.