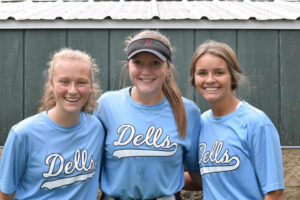 In the first game against Edgerton, Dell Rapids scored five times in the first inning, one more in the second, and then seven runs in the third.  The game ended after three innings with Dell Rapids taking the win 13-1.

Kya Alderson had three hits, including a double, and three RBIs.  Haileigh Barnhart had two hits, one a double, and three RBIs.  Lexi Ingalls also had  two hits, one a double, with an RBI.   Kenzie Garry and Rileigh Foster both had two singles and one RBI each.  Katie Scherff had two hits.  Alessandra Swartwout had a hit with two RBIs, and Katie Kvigne had an RBI.  Alderson pitched all three innings allowing a run, which was unearned, on two hits with four strikeouts.

The Dell Rapids offense did not slow down in the second game.  After a scoreless first inning, Dell Rapids scored 12 times in the bottom of the second.  Winner got a single run  in the third inning, and Dell Rapids took the win 12-1.

The three seniors for Dell Rapids were recognized at the games.  They are Payton Krumm, Kenzie Garry, and Haileigh Barnhart.