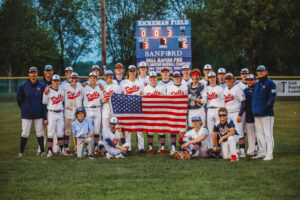 The Dell Rapids High School club baseball team is headed back to the State B Tournament after winning two games at Rickeman Field on Monday, May 23rd and Tuesday, May 24th in the Region 3B Tournament.

Dell Rapids scored four times in first inning.  Brayden Pankonen scored on a balk, Aiden Boechler had a two-run single, and Will Jaton added an RBI single.  They scored three more times in the bottom of the second.  Landon Ruesink had an RBI single, and Jack Henry had a two-run double.  The scoring continued with two more in the third.  Ruesink and Dylan Mathis both had RBI doubles.  Jaton drove home the final run on a sacrifice fly in the bottom of the fourth.

Dell Rapids scored three runs late in the game to secure a 6-3 victory over Lennox to punch their ticket to the state tournament on Tuesday, May 24th.

Jaton finished with a hit and two RBIs.  Pankonen had a hit and an RBI.  Treyse Eastman had a triple, and Mathis had a single.  Henry took the win on the mound pitching six innings allowing three runs, one earned, on two hits and four walks with seven strikeouts.  Pankonen pitched the final inning allowing one hit and striking out two.

Dell Rapids will look to defend their title at the state tournament in Sioux Falls on Monday, May 30th and Tuesday, May 31st.  Dell Rapids will play Parkston in the opening round at 12:00 p.m. on Monday.  Parkston was the last team to beat Dell Rapids, 8-4, on April 27th.