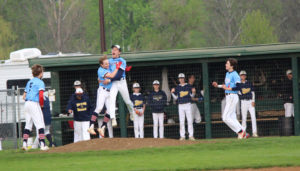 Dell Rapids and Tea may have played the best game of the high school season at Rickeman Field in Dell Rapids on Tuesday, May 18th.  On the line was a #1 seed in Region 3B and neither team would give an inch as it took ten innings to decide a winner.

Both teams ended with nearly identical stat lines, both defenses made great plays, and both starting pitchers dominated the opposition.  Both Dell Rapids and Tea ended with four hits each and one error committed, but it was Dell Rapids that had the edge in the stat column that mattered, the run column.

Landon Ruesink drove home Austin Henry after Henry doubled with one out in the bottom of the 10th inning.  Henry’s doubled sailed to the left field corner, and was nearly caught on a great diving play by Ian Bennett.  Ruesink hit a hard ground ball up the middle on the very next pitch to bring home A. Henry for the game winner.

Starting pitchers Cameron Jensen and A. Henry put on a show for the big crowd on hand.  The first hit of the game didn’t come until Nate Babb hit a one-out single in the top of the sixth inning.  Logan Boom followed with a single of his own to put two runners on with one out.   Dell Rapids was able to work out of that threat to keep the game scoreless.

That was not the first threat Tea put together in the game.  They opened the game with a threat to score.  Two of the first three batters drew walks and advanced to third and second respectively before A. Henry got a strikeout and a pop out to work himself out of the first inning jam.

Dell Rapids didn’t get their first hit of the game off Jensen until the top of the seventh inning.  Brayden Pankonen reached on a one-out single.  Pankonen’s hit brought a change of pitchers for Tea.  Trevor Welch was brought into pitch, and picked Pankonen off first base after just one pitch.  With two outs A. Henry hit a single to left field, but Dell Rapids was unable to score, and the game went to extra innings.

Tea threatened again in the top of the eighth inning.  Babb got on base with a one-out single, and then Boom was hit by a pitch.  After a fielder’s choice ground out, Carter McGregor flew out to left field to end the inning.  Neither team got a base runner until the top of the 10th inning.  With two outs Tea again was close to pushing across the first run.  Babb singled, and Boom reached on an error putting runners on second and third with two outs.  Dawson Portner hit a ground ball to the short stop Jack Henry, but J. Henry played the infield hop perfectly and fired a strike to first to get the third out.

That play set up the game winning bottom of the 10th inning.  Pankonen grounded out to start the inning.  A. Henry’s double came on a 3-1 count before Ruesink’s game-winning hit.

Jensen pitched 6 1/3 innings for Tea allowing just one hit while walking no batter and striking out 11.  Welch took the loss giving up an earned run on three hits and one strikeout.

A. Henry pitched seven innings giving up two hits with three walks and 17 strikeouts.  Pankonen got the win giving up two hits in three innings of relief while striking out three batters.  A. Henry had two of the four hits, including the double.  Ruesink had the RBI hit, and Pankonen also had a hit.

Dell Rapids will be the #1 seed in the Region 3B playoffs with a 9-0 region record.  They are 14-3 against Class B teams and 15-6 overall.  Dell Rapids will finish the regular season at home against Sioux Valley on Wednesday, May 19th.