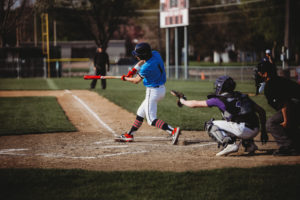 Dell Rapids got a 7-0 shutout win over Beresford at Rickeman Field on Wednesday, May 12th.  It was the third win in a row for Dell Rapids, and their fifth in their last six games.

The Dell Rapids defense got out of a first inning jam to start the game.  Beresford got their first batter of the game on base on a walk, but he was later picked off first by starting pitcher Jack Henry.  Beresford also had runners reach by an error and a single, but no runs were scored.

The score remained 0-0 until the bottom the third inning.  Aiden Boechler reached base on an error and was brought home by a single by Dylan Mathis.  Dell Rapids added three more runs in the bottom of the fourth inning.  Kaeden Eastman started the inning with a single.  J. Henry drew a walk, and then Boechler hit a two-run triple to right field.  Will Jaton followed with an RBI single, and Dell Rapids led 4-0 after four innings of play.

Dell Rapids put three more runs on the board in the bottom of the fifth inning.  Austin Henry got a lead off single, Landon Ruesink followed with a single as well, and then K. Eastman walked to load the bases with no outs.  A. Henry scored on a passed ball, and Ruesink came home on an RBI sacrifice fly by J. Henry.  A. Boechler added an RBI single for the seventh run of the game.

Boechler had two hits, one of them a triple, and three RBIs in the game.  A. Henry had two hits.  Jaton and Mathis both finished with a hit and an RBI.  J. Henry also had an RBI.  Sutton Williams, Ruesink, and K. Eastman also all had hits in the game.

Dell Rapids (13-6) will host Flandreau/Chester/Colman-Egan on Monday, May 17th, Tea Area on Tuesday, May 18th, and then Sioux Valley on Wednesday, May 19th to finish the regular season.